(THE GUARDIAN) Were it not for the cocoa-dusted silkworms garnishing the dish, an unknowing diner might never realise there was anything out of the ordinary about this tiramisu.

There may be only three dainty insects visible but 30 per cent of the luscious mascarpone cream in the confection is powdered pupae, which add a barely detectable bitterness that harmonises with the espresso-saturated sponge fingers.

The same goes for the innocuous-looking ravioli stuffed with mascarpone, Provençal herbs and water beetle flesh, which tastes like crab.

“Water beetles are big – if you saw one you probably wouldn’t want to eat it,” says Bangkok chef Thitiwat “Mai” Tantragarn, a veteran of local fine-dining restaurants such as D’Sens and Medici.

In Thailand’s north-eastern Isan region, water beetles are fried and salted, then scoffed like six-legged popcorn. Yet the only time you’re likely to see them in Bangkok is on touristy Khao San Road.

The team at Insects in the Backyard , which recently opened in the city’s new ChangChui creative complex, hopes to rid these arthropods of their stigma.

“I want this to be accessible,” says Mai. “I’m not trying to make scary food.”

He insists this isn’t a gimmick, but an earnest attempt to find value in something many here look down on. After all, some of the world’s top chefs have championed similar concepts, including René Redzepi at Noma in Copenahagen and Alex Atala at São Paulo’s DOM , who have both has used ants to spice up a dish.

“Even though people have been eating insects in Isan for years, the world is just starting to pay attention to the idea that this could be a viable food source,” he says.

In the future, he hopes to move beyond bugs to experiment with certain types of seaweed and other sources of amino acids.

“Let’s face it, in 100 years or so, our current sources of protein won’t be enough to feed all the planet’s human beings.”

It’s all in keeping with the eco-friendly philosophy of ChangChui, a space with shops, galleries, restaurants and makeshift bars.

There is an old Lockheed Tristar airliner at its centre being transformed into a restaurant and everything is constructed from recycled materials – chandeliers made from old bicycles and buildings made of repurposed wood and scrap metal. 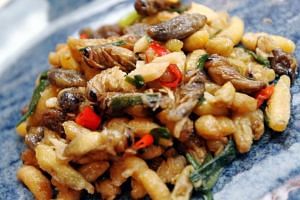 Learn to cook and eat insects with new cookbook

Launched in June by Mr Somchai Songwattana, the CEO and art director of Thai fashion brand FlyNow, it’s a glaring departure from the shiny new shopping malls lined up along Sukhumvit Road.

After dining on dishes such as seared scallops with Jerusalem artichokes and crispy bamboo caterpillars, visitors can buy tree-planting supplies, catch an indie flick in the cinema, or shop for upcycled furnishings of their own to take home.  • Mains from around $12.50, 462 Sirindhorn Rd, +66 20 357 000, www.insectsinthebackyard.com