Besides books, these seven bookstores have a host of other offerings from food to fashion

The best bookstores do more than sell books.

Some even manage to look great while doing it.

The Sunday Times rounds up seven special bookstores in Asia and the Pacific worth travelling for.

Step into a whimsical wonderland, with colours snaking across the ceiling and up the stairs and circular reading cubby holes fitting snugly into bookshelves.

With its curved lines and organic shapes, the space encourages exploration and interaction and is sure to delight the young and young at heart. 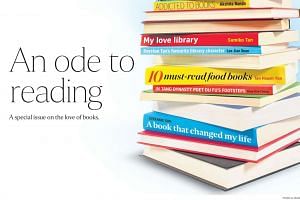 An ode to reading: A Sunday Times book special

Kid's Republic is one of China's first and most extensive children's bookstores. It offers more than 3,000 illustrated storybooks in Chinese, English and Japanese.

The store was designed by Sako Architects, a Beijing-based firm of Japanese architect Keiichiro Sako.

Its projects include Cube Tube in Jinhua, Zhejiang, with a facade of square windows of varying sizes; and the bright and cheery Family Box in Beijing, an early childhood education centre.

When husband and wife team Lalitha Lakshmi and Subodh Sankar opened Atta Galatta Bookstore in April 2012, they knew they had to do more than put books on shelves to sustain their business.

So Atta Galatta became a community space for cultural events from the start, entertaining adults and children with book launches, poetry readings, film screenings and musical performances, where like-minded people could meet and contribute their art and ideas.

These days, customers can count on catching five to eight events every weekend across the two floors of the 280 sq m shop.

Comfortable sofas, tables and chairs on the first floor provide patrons with a pleasant place to read.

When people started spending more time at the store, the couple opened a cafe and bakery onsite offering South Indian-style drip coffee, sandwiches, cakes and bread rolls. These have become so popular that the Atta Galatta brand of baked goods is now sold at most supermarkets in Bangalore.

The store's catalogue is purely community-driven, with patrons contributing their time and effort to recommend, select and source the books from these languages, many of which the owners cannot read.

An underground carpark is the unlikely location of what was dubbed China's most beautiful bookshop by American news channel CNN in 2013.

A pair of parallel yellow road markings remain and lead the way to a large black cross which dominates the wall at one end of a cavernous hall - the idea being that reading is a religion. Even the cashier counter is well read, given that it is made from thousands of old books.

There is a sizeable collection of social science and humanities books, though they are largely in Chinese. For those who wish to linger in the 4,000 sq m space, there are plenty of seats as well as a cafe.

Since the opening of its flagship store in the Carlton neighbourhood of Melbourne in 1969, Readings has been a beloved champion of Australian literature, starting from Helen Garner's first novel Monkey Grip in 1977, to selling thousands of copies of The Boat, an award- winning collection of short stories by Vietnamese-Australian author Nam Le, in 2008.

Though it has expanded to include five stores in Melbourne, with two more set to open later this year, Readings has maintained its independent bookstore vibe.

Each shop has its own character and the books sold reflect the varied tastes and passions of its staff.

A Readings Monthly newsletter features staff reviews and author interviews, and three of its bookstores hold about 250 events a year such as book launches, panel discussions, musical performances and storytelling for children.

It also has a charity arm called The Readings Foundation, which provides grant money to local organisations that promote literacy, community integration and the arts.

In honour of its support of Australian authors and its focus on the community, Readings was awarded the Bookstore of the Year Award at the London Book Fair International Excellence Awards earlier this year.

Sleek and modern in its aesthetic, yet decidedly retro in its tastes, Daikanyama Tsutaya Books updates what people loved best about old- fashioned bookstores for present day.

Outside, the store's simple rectangular structure with a bright white facade of interlacing Ts belies the cosy, softly lit space within.

Designed by award-winning Tokyo-based firm Klein Dytham Architecture, the store is split between three buildings which are connected in the ground level by a 55m aisle called Magazine Street.

Six book departments - cuisine; travel; cars and motorcycles; architecture and design; art; and humanities and literature - extend off the aisle into wings where pristine rows and shelves of books are interspersed with deep leather armchairs for reading.

Thousands of music albums and DVDs are available too, with a dedicated concierge for specialised recommendations. Customers can sample more than 1,000 jazz, rock, pop and classical music albums at 40 seated listening stations in the store. If a classic movie title is not available on DVD, the concierge will make a copy for you.

On the second floor, in the Anjin Library & Lounge, customers will find a salon where they can have coffee or a whisky from the bar and browse a collection of rare books and 30,000 vintage magazines from around the world.

The store also offers a travel desk, a camera shop, a restaurant and a stationery department where customers can buy speciality paper, utensils and pens. Monogramming is available as a same-day service.

The store is a celebration of the tactile, in the most stylish way.

It is not just a bookstore, it is also a lifestyle destination.

Besides the 250,000 titles lining the rows of shelves spread over 8,000 sq m, the flagship store of Taiwan's Eslite chain offers fashion, food, music and movies as well as design and craft items, including those from local cult brands such as Mogu.

In terms of convenience, it is hard to beat as it is connected to City Hall MRT station. While it attracts 12 million visitors a year, it still manages to feel cosy and inviting.

He points out that there are many quiet corners for reading "and they don't chase you away".

Open: 10am to midnight

Opened less than two months ago, Zombie Books is already forging a reputation as a trendy indie space for buying books and hanging out.

More than 10,000 books, from contemporary fiction by Japanese author Haruki Murakami to graphic novels and vintage English children's books, are artfully displayed on pale wood shelves across the first floor.

Anyone looking for a quiet place to read can head up to the second floor's co-working and gallery space.

Those in need of a little excitement can continue up to the third floor, where a bar, decorated with an eclectic mix of multi-coloured glass chandeliers and 1970s era sci-fi movie prints and posters, serves coffee and cocktails, and hosts live bands on Friday and Saturday nights.