Mr Soh Ah Seng, 82, was frugal and kept much to himself. He was already dead for at least two days before his neighbour called the police

Living alone, and often keeping to himself, Mr Soh Ah Seng usually left the door of his one-room flat in Geylang Bahru slightly open during the day.

Community workers who paid regular visits to senior citizens in these rental flats stopped to chat with the 82-year-old from the corridor. His next-door neighbour, Mr Kong Hock Hin, said "hi" almost daily, venturing inside when invited. It was a privilege that Mr Soh extended to precious few.

But on Jan 22, Mr Kong, 54, noticed that the blue door was shut. The grille was also locked. 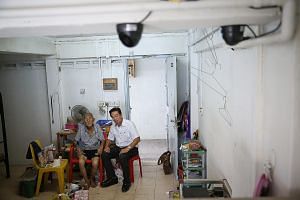 'When I die, I want someone to know': Fear of dying alone increases among elderly folk

The next day, another neighbour from a few floors below knocked on the door. Mr Tan Beng Heng, 64, wanted to hand over the coffee powder that Mr Soh had requested. Mr Soh, who had difficulty moving around, asked Mr Tan to buy groceries for him every few days.

Mr Kong joined in the pummeling on the door, to no avail. He began to feel uneasy, but thought that maybe Mr Soh had gone to the hospital.

Sometimes see him downstairs, sometimes don't. We never call him. We never talk about problems. Talk also, nobody will visit you, nobody can help you.

The police entered Mr Soh's home of 12 years with the help of the Singapore Civil Defence Force.

The Sunday Times understands that Mr Soh's body was found face up in the kitchen, which was too small to accommodate the length of his body. His head was leaning against a wall and he had been holding on to a walking stick.

He was inches away from the toilet, which had an alarm system that was connected to the Touch Seniors Activity Centre downstairs and linked to every lift landing in the block.

Mr Richard Chia, 52, a programme executive at Touch in Geylang Bahru, was summoned to the scene as the police wanted help to trace the dead man's next-of-kin, a younger sister. Since 2003, Mr Soh had been a member of the centre, which is located at the bottom of his block, Block 61.

Mr Chia thinks that Mr Soh had fallen backwards from the stove. His body was bloated and there was blood on the floor, he says.

Nobody knows when exactly Mr Soh died, but he was last seen on Saturday morning - which meant that he had lain dead for at least two days.

Mr Soh's story may tap into the worst fears of many people, but the truth is that dying alone is a rare occurrence in densely populated Singapore, which is home to about 5.5 million people.

Specific figures on the number of people who die alone are hard to track, but the Health Sciences Authority's Forensic Medicine Division, which operates the mortuary located at Block 9 at Singapore General Hospital, handles between 60 and 75 unclaimed bodies every year.

This is a low percentage of the total deaths in a year. Last year, there were 19,805 deaths in Singapore, according to figures on the website of the Immigration and Checkpoints Authority (ICA), which also monitors births and deaths.

But the fear of dying alone can run deep, even though comparatively few people die in such circumstances.

Some of her clients, who are mostly elderly, "do not fear the dying process, but express the concern that they would not be found after passing away, that they do not want to be a decomposed corpse", says Ms Poh, 33.

These clients tend to live alone, are more socially isolated, and do not have a lot of contact with their families, she adds.

The number of Singapore residents who live alone, especially seniors, has risen in recent years, figures from the Department of Statistics show.

Mr Soh, whose last years were marked by silence and stoicism, was one of these.

The Touch seniors centre in Geylang Bahru has 785 old folk on its books. It organises outings, parties, exercise sessions, karaoke, indoor games and Bingo sessions. Priority is given to those in low- income households in Blocks 61 and 62.

When The Sunday Times visited recently, two tables are set up outside the centre for people playing Rummikub, a tile-based game with elements of rummy and mahjong.

A few other seniors are seated, legs stretched out and reading newspapers. Near them, the neighbourhood cat, a tabby called Bao Bei ("Precious" in Mandarin), is taking a nap.

Mr Soh used to be part of this social scene but, over the years, he stopped taking part in the daily activities organised by the centre, says Touch worker Mr Chia.

This was partly because Mr Soh became more frail as he aged, especially after a leg operation in 2014.

It was also a question of temperament.

"He kept more to himself. He didn't like too big a crowd. He was close to only a few. Sometimes, the seniors just want to be alone," says Mr Chia.

Most mornings, he shot the breeze with a small group of friends at the void deck and chatted with neighbours who went in and out of the lifts nearby.

Mr Soh "listened a lot and talked a little bit", recalls Mr Ho. He adds that his friend avoided people who "talked big or showed off about money".

When his friend's body was discovered, the police rang Mr Ho because his number was stored in Mr Soh's mobile phone.

During that phone conversation, Mr Ho did not recognise the Mr Soh Ah Seng being referred to because he knew his friend better as "kuay tao", or "chicken head" in Hokkien.

Mr Soh bore this nickname with good humour, says another Touch worker, Mr James Lee, 55. His distinctive, triangular quiff of white hair was similar to a mohawk once sported by celebrity David Beckham, says Mr Lee, who had known Mr Soh for more than a decade.

Most of Mr Soh's friends say his hair was au naturel, though at least one thinks he used water to style it just so.

Mr Soh was known to live frugally, getting by on less than $500 a month, according to Touch files. When he dropped by the coffee shop near his block, he sometimes went without a drink while others had coffee. He had worked various jobs, including being a vegetable seller and a cleaner.

His neighbour, Mr Kong, who works in the karung guni (rag and bone) trade, was probably the person who knew him best. Visiting Mr Soh a few times a month, his friend paints a portrait of a disciplined and independent old man.

According to Mr Kong, Mr Soh usually cooked for himself and made simple meals such as porridge with a can of fish with black beans.

He usually wore a spotless white shirt and shorts. His sparsely furnished flat was kept immaculate and he was particular about spraying insecticide to get rid of ants.

He sometimes shared his smokes - "ang hoon", which are loose tobacco leaves that are rolled up into cigarettes - with Mr Kong, though he only ever said "good morning" to another neighbour of 10 years who lived diagonally opposite.

For some seniors in the neighbourhood, "their world is Geylang Bahru", says Touch's Mr Lee.

While Mr Soh, who used a walking frame, did not habitually roam far from home, he was "strong and independent", Mr Lee adds.

However, this stoicism also gave Mr Chia the impression that Mr Soh was "quite lonely", especially when he first accepted and then later refused to entertain volunteer befrienders.

"He tried not to impose on others," he says.

Two years ago, part of Mr Soh's right leg became red and swollen, looking as if it was about to burst, recalls Mr Lee. He tried to persuade Mr Soh to go to the doctor, but Mr Soh kept saying "beh yao kin" ("it doesn't matter" in Hokkien).

"Until one day I found him unable to walk," Mr Lee says. "There was no other solution. He had to accept help."

Mr Soh had surgery on his leg, which had cellulitis, a bacterial infection. For two months in 2014, he stayed at two hospitals. A Touch nurse helped in his recovery at home, changing the dressing on his leg for another two months.

After he was discharged, he told Mr Chia that he was grateful he had not had to amputate his leg.

Mr Soh could be obliging, says Mr Lee. Last year, when the Touch centre asked him to take part in a video made by volunteers advocating healthy eating, he let them film part of the video in his flat.

But he generally guarded his privacy fiercely, especially when it came to personal matters.

In some ways, Mr Soh revealed more of his vulnerabilities to community workers such as Mr Lee and Mr Chia than to his friends. Avoiding personal topics seemed to be part of an unspoken code among these seniors.

Mr Soh was divorced and was said to have five children, one of whom had died. His children were not known by his friends, associates or neighbours to have visited him. His sister, the only relative known to have been in contact with him, declined to be interviewed.

Mr Tan Paul, 71, a former shipping surveyor and a void deck friend, says their group would pass the time talking about topics such as Chinese TV dramas they watched, food or current affairs.

"Sometimes see him downstairs, sometimes don't. We never call him," he says.

"We never talk about problems. Talk also, nobody will visit you, nobody can help you," he adds. He does not elaborate.

Nearly three months later, Mr Soh's death still elicits shock and sadness. Mr Ho says: "There are no tears, but it's in the heart."

Standing outside the corridor they once shared, Mr Kong says he is glad he did not see his friend when he was discovered, decaying in death. He also wonders why Mr Soh had shut the door.

"I don't fear death, but what if one day I were in that situation?" he says. "I didn't want to look at him because I have my own memories of him."

A version of this article appeared in the print edition of The Sunday Times on April 17, 2016, with the headline ''I noticed a foul smell, so I called 999''. Subscribe
Topics:
More
Whatsapp Linkedin FB Messenger Telegram Reddit WeChat Pinterest Print Purchase Article Copy permalink