I've decided to bury the hatchet and end a long-running feud.

On many occasions, I have railed against the malevolent and despicable influence of the iPad. But I have decided to accept the tablet as an inevitable friend and partner in childcare.

Like Marvel hero Thor reluctantly joining forces with his arch foe Loki, I know instinctively the gadget means to do us harm, but it certainly comes in handy in battle - the battle to survive as a dad.

My two sons are aged five and three and I'm happy to say they don't get much screen time during the mostly busy Monday-to-Friday routine.

In an ideal world, they wouldn't have any. They would be outdoors climbing trees, constructing make-believe castles and sitting on park benches reading novels. But this column is not about perfect parenting - it is about real parenting.

On those days when I have a long shift on a Sunday (I'm talking about 7.30am to 8.30pm), my iPad has become a convenient and vital partner in getting through the day.

I need it to take some of the shelling, so I can recharge behind the trenches.

Roughly speaking, on a typical Sunday, the boys and I might do half an hour of Lego, followed by 20 minutes of painting, a session of hide-and-seek and 30 minutes of kicking the ball at the park.

Before I had kids of my own, I would probably have sneered and criticised parents if I had seen their offspring glued to a screen in a restaurant. But with the weather-beaten wisdom I've accrued from being a dad, I'm in favour of taking along the iPad to dinner. 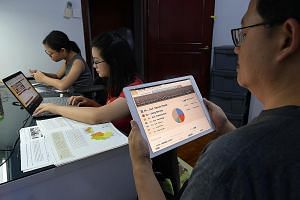 Feel free to assume that during this time, I am constantly disciplining and scolding them to quit whining and stop pushing each other.

At the end of all that, as my patience nears breaking point, my iPad taps in like we're a WWE tag team at Wrestlemania XXVI.

Thirty minutes of Ryan's Toy Review or Paw Patrol episodes for the boys means 30 minutes of recharge time. It helps me rejuvenate and allows me to reboot as "enthusiastic dad" again.

Some Pinterest Parents might be angelically declaring at this point that "they never resort to screens". Well, you're a better person than me then.

Before the older generation chips in with disapproving grimaces at my reliance on gadgets, please. Don't pretend that if the Samsung Galaxy Tab had existed in 1987, you wouldn't have used it.

Every generation has its own crutch that looks like lazy parenting. For my generation, when we were growing up, it was the television. I'm pretty sure I spent an obscene amount of time watching Thundercats and Fraggle Rock during my school holidays.

The problem is, I can't remember how much and, when I ask my mum and dad, they have forgotten too. How convenient.

Every generation of parents disappoints the one before them.

I wouldn't be surprised if even the wholesome radio culture had a bad rap in 1925 - "really Margaret, I think your young whippersnapper Frederick is spending far too much time on the wireless".

Before I had kids of my own, I would probably have sneered and criticised parents if I had seen their offspring glued to a screen in a restaurant.

But with the weather-beaten wisdom I've accrued from being a dad, I'm in favour of taking along the iPad to dinner.

In Singapore, it is common for families to dine at restaurants. If 15 minutes of Peppa Pig will give the adults a window of peace to talk and eat in a civilised fashion, then I am all for the table-side tablet.

Those who cast disapproving glances my way are almost certainly the same people who would be inconvenienced by the screeching my toddler would otherwise be producing.

You can't have it both ways.

• The writer is a radio DJ and the author of 99 Rules For New Dads.

A version of this article appeared in the print edition of The Sunday Times on March 04, 2018, with the headline 'Tablet as babysitter? Why not?'. Subscribe
Topics:
More
Whatsapp Linkedin FB Messenger Telegram Reddit WeChat Pinterest Print Purchase Article Copy permalink