Living with diabetes as a teenager was like a stressful "roller-coaster ride" for Ms Felicia Tan, 22.

Ten years ago, at age 12, she was diagnosed with Type 2 diabetes.

"It wasn't an easy journey. I didn't have any idea what diabetes was and I thought I was going to die early of this illness," says Ms Tan, an administrative clerk who has a family history of diabetes. 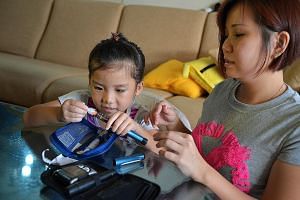 Only five and living with diabetes 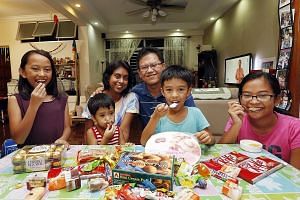 Let kids have some junk food

At that time, her mother noticed that she was often very tired after school, a common symptom of diabetes.

The fatigue was so severe that she eventually did badly for her Primary School Leaving Examination, she says.

She kept her diagnosis to herself for reasons that turned out to be well-founded.

She says: "I felt slightly deprived and envious of my peers. I have a sweet tooth. I couldn't eat desserts, but my friends ate them in front of me. I was afraid my friends would make fun of me or think it was contagious. "It took me half a year before I plucked up the courage to share my illness with my friends. They made negative comments and were not supportive. Someone called me 'diabetes b***h'."

She says they were perhaps too young to support and understand her situation then.

Checking her blood sugar levels on a glucometer, injecting insulin and taking tablets were part of her diabetes management.

"I was rebellious during my teens. I didn't like to see the readings on the glucometer. If they were high, I felt very discouraged. It was like a phobia. At one point, I didn't want to test my blood anymore."

When she was 16, she faked her blood sugar readings for a year until she was found out by hospital staff when she went for check-ups every three months.

The nurses discovered that her glucometer, which had a memory function, had no records.

She started to change her mindset after realising she had disappointed her parents, who reprimanded her after that episode.

What helped were motivational quotations she found and kept in her wallet.

She also realised she had the support of not only her parents, but also her church friends and colleagues.

It helps that injections are less painful now with the insulin pump she has been using since last year. Previously, she used syringes and pen injectors for jabs.

"I reflected that I have to make changes if I want to live a healthier life," she says.

A version of this article appeared in the print edition of The Sunday Times on May 15, 2016, with the headline 'She faked her blood sugar readings for a year'. Subscribe
Topics:
More
Whatsapp Linkedin FB Messenger Telegram Reddit WeChat Pinterest Print Purchase Article Copy permalink