The resort announced on Wednesday the building of the world's first Zootopia-themed land in its latest park, featuring characters and stories from Disney's animated hit Zootopia (2016). Construction will begin later this year for an unspecified opening date.

The expansion will bring the total number of themed lands to eight in the Shanghai facility, which debuted in June 2016.

"The rapid rate of expansion at Shanghai Disney Resort demonstrates our confidence and commitment to the company's future development in China," said Mr Bob Chapek, chairman of parks, experiences and consumer products at The Walt Disney.

Zootopia is designed to blend Disney's storytelling and technologies in order to bring this fan favourite movie and its characters to life, the company said.

By rolling out its own merchandise, entertainment and food and beverage offerings, the new land will also invite guests to fully immerse themselves in the mammalian metropolis of Zootopia, and go along on an adventure with Judy and Nick, the lead characters from the Academy Award-winning movie that has been the highest-grossing animated film in Chinese box-office history.

Blockbuster intellectual properties with a substantial follower base such as Zootopia stand to attract both newcomers and recurring visitors alike, said Dr He Jianmin, a professor specialising in tourism management at Shanghai University of Finance and Economics. 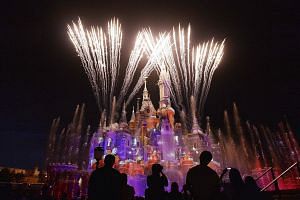 "Disney has this long tradition to introduce new attractions to its parks each year. New IP rollouts can provide constant inspirations for Disney's parks and resorts, therefore enhancing user loyalty," he said.

Shanghai Disneyland logged some 11 million visitors in the first year of operation, putting it in the top eight theme parks worldwide and one of the most-visited sites in China, according to data from the Themed Entertainment Association and consulting firm Aecom released in May last year.