He weighed 5 lbs, had the roundest eyes, nodded to Bob Marley's music, hopped like a bunny and had a ferocious little growl.

Barkley, a black pomeranian from Florida in the United States, had more than 420,000 followers on Instagram and 450,000 on Vine.

His sudden death on Oct 26 - just a few days short of his third birthday - saw an outpouring of grief from around the world which is still happening today as more social media followers learn about his death.

His owner, Elisabeth, posted on Oct 27: "Yesterday at 8am my heart was ripped out. Our beautiful, beloved Barkley left this world. It was the most horrific freak moment that I find very hard to explain in detail, so I won't. But I need to tell you he has gone because I know many of you loved him too."

She spoke about how he was the core of the family and "pure happiness". He was also her "life support during the hardest times" and "an overflowing source of love, light & positivity when I needed it most".

The post has since seen been liked more than 16,500 times and has had nearly 8,000 comments with people around the world posting their shock, love and condolences.

One poster said: "I'm so sorry for your loss. Barkley always brought a smile to my face and whenever I was down, looking at his pictures and videos would bring so much joy."

Another said: "I'm so sorry to hear this. I've been following Barkley since you guys started on Vine. Thank you for sharing him with the world. He helped me get through hard times. RIP Barkley."

In a sea of social media dogs, Barkley stood out because he was so full of life. 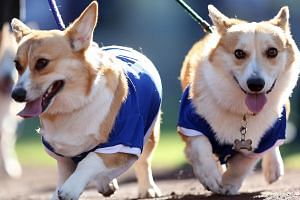 His owner dressed him in costumes and the posts had witty captions. He rubbed shoulders with celebrities like singer Meghan Trainor and also met Dog Whisperer Cesar Millan.

But more than that, it was his wide-eyed expression, open mouth and sheer joy that captured hearts as he ran in fields, chewed sticks and chased birds.

His bio on his website said he was born on Nov 4, 2012 and that he was "ultra friendly & full of fun, jammin', pranking & spreading love around the globe". Earlier this year, his owner also got a Blue French bulldog, Balou Blue.

His owner did not want to reveal details of how Barkley died. In a post two weeks after his death, she said: "The reason we don't want to talk about what happened is because it was very unpleasant. It happened in nature. He did die instantly. No one is responsible but yes of course I have 1,000 'what if's'.

"If I talk about it on social media it can very likely be misconstrued, exaggerated & misunderstood & we don't want that to be what you remember about our beloved Barks. We want that if anyone at all remembers our Barkley a few years down the line, it's for being a 5lb funny, infectiously happy & laid back little Pom who spread good vibes around the world via social media."