Owners of jumbo flats like the spaciousness of their homes and having more room for sleeping, playing and entertaining

They are among the largest apartments in Singapore and, with the country's new President, Madam Halimah Yacob, living in one, jumbo flats have been thrust into the spotlight.

Considered rare in Singapore, there are only about 2,900 jumbo flats here, out of about one million Housing Board (HDB) flats.

A check with HDB found that there are no plans to convert more of such flats for sale. Jumbo flats are converted from smaller flat types, such as three- and four-room flats.

In the 1980s, a number of these flats remained unsold after their completion due to low demand. So in 1989, the HDB combined the flats into larger ones by knocking down the wall between them.

Woodlands was the first town to have such flats, and today, 82 per cent of these flats can be found there. The rest are in locations such as Yishun, Jurong East, Bedok and Tampines.

In comparison, an HDB executive flat, with three bedrooms and two bathrooms, is about 1,399 sq ft, according to HDB's website.

It is also possible to combine flats into jumbo flats through a conversion scheme under HDB. 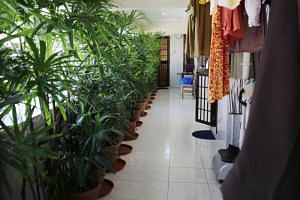 Moving out of Yishun: 6 things to know about President Halimah Yacob's jumbo flat 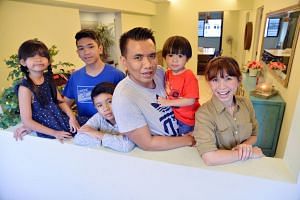 A jumbo love for jumbo flats

A licensed contractor will also have to be engaged to remove the PUB meters for electricity, water and gas supply for one of the two units.

Singaporean poet and playwright Robert Yeo is one home owner who decided to combine two units to make one jumbo flat.

The 77-year-old bought two three-room flats in Toa Payoh in 2003 and knocked down the wall between them to create a 1,400 sq ft jumbo flat.

He says: "My wife and I have different biological clocks. I sleep and get up early, while she likes watching tennis in the early hours of the morning. So we sleep in different rooms so as not to disturb each other. Having a bigger space lets us do this."

It is also possible for residents to buy the space in front of their flat under HDB's sale of recess area scheme and have it be part of their jumbo flat, provided that the space meets technical requirements relating to design, access, fire safety and ventilation, and there are no service ducts such as gas pipes, water meters and electrical ducts in the space.

The Marsiling-Yew Tee Town Council, which oversees more than 1,700 jumbo flats in the western part of Woodlands, puts jumbo flats in the executive flat category and charges their owners $96.50 a month in service and conservancy fees.

According to research by ERA Realty, there have been 161 transactions involving jumbo flats since 2012, with 19 such flats changing hands from January to July this year.

Mr Chris Koh, 50, director of real estate agency Chris International, says the main benefits of living in a jumbo flat are the spaciousness and large number of bedrooms.

He says: "Having more bedrooms is useful if there are three generations living in the flat.

"Should the family want to turn one of the bedrooms into a study or a music room, they can always do so."

But with more space sometimes comes more disagreements on what to do with it, he adds.

"Most families living in jumbo flats do so with their parents and disagreements can sometimes occur regarding the flat's decor. For example, working adults tend to want a modern look for the home, while their elderly parents often want simpler designs and more storage space."

Hospitality designer Desmond Ong, 40, says the main challenge of designing a jumbo flat is that the renovation costs can escalate quickly, due to the flat's large size.

"One should be prepared to pay more than normal for renovation. This is because jumbo flats always require more of everything - cement, plastering, paint - they all add up," he says.

"I think the renovation is worth the money as we intend to stay here for the long term. And I am very happy and grateful to be able to come home to such a spacious home every day," he says.

With 1,900 sq ft of space in his jumbo flat, there is more than enough room for Mr Heman Tan, 49, to display about 30 clay sculptures made by him, as well as five bicycles.

The spaciousness and price were the reasons the chef, ceramic artist and triathlete chose to live in this flat - a four-room unit combined with a three-room unit - in Woodlands Avenue 1 since 2007.

It has two living rooms, five bedrooms, three toilets, a large kitchen, a dining room, a laundry area, a storeroom and a corner for guests to put on and remove their shoes.

Big home to host loved ones

At his son's baby shower in April, Mr Jimmy Lim hosted about 50 people in his jumbo flat in Woodlands Street 83.

The catered food was placed in his multi-purpose room. "Many guests said this was the first time they saw catered food inside the home and not in the common corridor," says Mr Lim, 40, an insurance agent.

His 2,067 sq ft flat - a three-room flat and a four-room flat combined - is a welcoming and versatile space.

Almost like having a lift landing and corridor all to themselves

This jumbo flat in Ang Mo Kio Avenue 6 is made up of two four-room units that are a mirror image of each other, with the main doors face to face.

That same year, they applied for a permit from the Housing Board to knock down a wall that separated the storerooms in the flats.

More to clean, but also more to enjoy

Secondary school teacher Indra Rajen's home is so spacious that she can play badminton with her son in one of the family's two living rooms.

"When my children were younger, they could even cycle around the house," the 49-year-old says.

A version of this article appeared in the print edition of The Sunday Times on September 24, 2017, with the headline 'Jumbo space for everything'. Subscribe
Topics:
More
Whatsapp Linkedin FB Messenger Telegram Reddit WeChat Pinterest Print Purchase Article Copy permalink