NEW YORK • The statement did not say whether the editor was sacked over the publication of a contentious essay, but the New York Review of Books acknowledged the "validity of this criticism".

On Monday, it issued a statement addressing the sudden departure of Mr Ian Buruma last week, saying "we acknowledge our failures in the presentation and editing" of an essay by a man who had been accused of sexual assault.

Jian Ghomeshi, a former Canadian radio broadcaster who was acquitted of sexual assault in 2016, wrote about feeling suicidal after being ostracised on social media and in Canadian newspapers.

He claimed that his experience confirmed "the power of a contemporary mass shaming".

The piece caused a backlash, with some criticising Ghomeshi and the Review for downplaying the accusations against him, which had come from more than 20 women.

Five days after the essay was published, Mr Buruma left the Review.

On Monday, while citing Ghomeshi's free-speech rights, the magazine described "our failures in the presentation and editing" of the essay. It noted that the "failures began with the decision to not follow the Review's usual editorial practices set up by Bob Silvers and Barbara Epstein", the editors who founded the magazine in 1963. 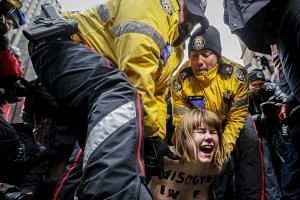 "This article was shown to only one male editor during the editing process," the statement noted.

"Most members of the editorial staff (including six female members, four of whom worked with Bob and Barbara) were excluded from the substantive editorial process."

The magazine said the experience of the women who complained about Ghomeshi's behaviour "is definitely a large part of the story, and the article's tone and subsequent comment appear to downplay or ignore this".

That "subsequent comment" included two interviews Mr Buruma gave in the wake of publishing the piece. He told Slate that "not everybody agreed" about the wisdom of publishing the essay but that once the decision was made, the staff "stuck together".

He also spoke to Dutch magazine Vrij Nederland (VN), saying he had been "convicted on Twitter, without any due process".

Monday's statement said "most of the editorial staff objected to (the) comments to Slate and VN".

"Many felt his comment that the staff came together after initial objections to the piece did not accurately represent their views."

The statement concluded: "The New York Review has a long history of publishing controversial and unpopular pieces and will continue to do so. However, in the future, we expect the editing to live up to the standards to which the Review aspires to."