Singapore’s latest escape room, launched yesterday, is built into a 7m-long truck. And it is free.

This museum-themed escape room, called Collab and Conquer, was developed by the Ministry of Culture, Community and Youth (MCCY) and Kult, a collective of multidisciplinary artists.

The ministry touts it as the latest effort to strengthen cohesiveness among people here, regardless of nationality, race or religion. It does so by letting individuals collaborate in a group of up to six, including strangers, to solve a mystery.

The game’s premise is that a $3-million painting by Singaporean artist Chris Chai has been stolen from a museum a day before it is to be revealed, in what is billed as the country’s biggest art heist.

The culprit is possibly a curator, artist or security guard. Players are given a handful of clues and have 30 minutes to find the artwork.

The mobile truck will travel to different places around the island over the next month.

Mr Chen Hsin Yeow, 43, MCCY’s deputy director of corporate communications, says: “Collab and Conquer is one of many things MCCY does to engage Singaporeans to build a caring, cohesive and confident nation.”

In the activity, he notes, participants have to solve challenges and get to know one another better. 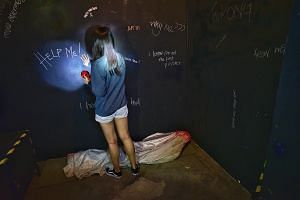 Choose your own escape

So much to do locked in a room

Mr Raja V., 53, director of Kult, says: “As you experience the game, you will find that different people have different skill sets, which is great. They realise that there is this need to work together.”

Ms Liyana Hidhir, 25, who works in a creative agency and played the game last Tuesday, says: “Even though I played it largely with strangers, the experience was not awkward for me. I generally have an open mind about meeting new people.

“In an indirect way, it honed in on the message that even though we are among people we don’t know, we might have to work together for a common goal at times.”

To participate, sign up at bit.ly/collabandconquer. According to the organisers, the response has been very positive, with some sessions fully booked. The escape room also accepts walk-in players.

A version of this article appeared in the print edition of The Sunday Times on January 27, 2019, with the headline 'New escape room in a mobile truck'. Subscribe
More
Whatsapp Linkedin FB Messenger Telegram Reddit WeChat Pinterest Print Copy permalink