French celebrity chef Joel Robuchon, who has more than 30 Michelin stars to his name, has entrusted two new chefs to head his Singapore restaurants, both of which are in Resorts World Sentosa.

He made the announcement at the two-Michelin-starred L'Atelier de Joel Robuchon at lunchtime last Thursday. Kim Joinie-Maurin, 35, a French citizen of South Korean parentage, will take over as chef de cuisine at Robuchon's three-Michelin-starred eponymous fine-dining restaurant.

The former sous chef, who has worked with Robuchon for 11 years and at the Singapore restaurant since its opening in 2011, has stepped up to replace head chef Michael Michaelidis.

Michaelidis has moved on to lead the team at Robuchon's three-star gastronomic restaurant at Yebisu Garden Place in Tokyo.

He has spent eight years working with Robuchon and moves here from the three-Michelin-starred fine-dining Robuchon Au Dome in Macau, where he was its No. 2. 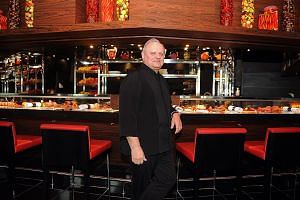 Robuchon's empire of more than 25 restaurants spans 13 cities, from Paris to Las Vegas.

Speaking in French on the movement of his chefs and their relocation to various cities, Robuchon, 72, says: "It is good for them to travel and have an opportunity to be in another country, to discover products and culinary cultures of each country. It is good for their skills, it helps them to progress."

His translator is chef Philippe Braun, who has been working with him since 1986 and is now his right-hand man.

Robuchon says he has given Joinie-Maurin and Massot the "liberty to express themselves" with new dishes in their new roles as head chefs.

The chef-restaurateur has plans to open restaurants in New York and Miami in the United States and in Geneva, Switzerland.

His new eponymous fine-dining outpost in New York's mid-town will be headed by chef Alain Verzeroli, the former executive chef at his three-star Tokyo restaurant.

In 2019, Robuchon, in collaboration with renowned Swiss hotel management school Ecole Hoteliere de Lausanne, will open Institut International Joel Robuchon, a culinary and hospitality school, in Montmorillon, France. It will take in 1,400 students.

Robuchon says he decided to open the school because he wants to impart his knowledge, recipes and techniques to future generations.

The school will also have operational hotels, restaurants and bars which will be open to the public. This is to better equip its students with the necessary skills for entering the workforce.

He adds: "Many students, when they leave school and are plunged into the real world, are not ready. This school will give them a chance to train and be ready for the real world."