The Jaguar I-Pace packs a punch with twin motors that deliver a combined 400hp and 700Nm of torque, with head-snapping acceleration to 100kmh in under five seconds

It is six in the morning and my first work trip as an automotive journalist is off to a banging start with my taxi getting into an accident.

That would not have happened if I were in the Jaguar I-Pace, whose safety guardians will come in handy on our journey up north today.

Myself and two other journalists were up bright and early to see if Jaguar's sleek I-Pace, an all-electric sport utility vehicle, can run from Singapore to Kuala Lumpur in just one charge, a distance of around 360km.

Even though the route had been reconnoitred, would we actually make it?

We set off at 6.30am with the batteries brimmed to their 425km maximum.

Our first rendezvous with the three support cars was the Shell station after the Second Link. By this time our I-Pace had used up just 50km.

We began our journey northwards, stopping for a quick toilet break at the highway rest area in Pagoh and a driver change with myself behind the wheel.

Having earlier reviewed the I-Pace, it was like slipping on a well-worn glove. Comfortable and effortlessly quick, the I-Pace is a glimpse of the future.

Twin motors deliver a combined 400hp and a whopping 700Nm of torque, with head-snapping acceleration to 100kmh in just under five seconds.

Its supple ride cossets you as your bottom rides on well-bolstered seats.

But my review was done amid Singapore's urban jungle, where range anxiety is as foreign a concept as hiding under your table in an earthquake. That was the unspoken unease at the start of our trip.

At some point, would we have to run without the air-conditioning switched on such that by the time we reached KL, we would resemble a carful of cooked sausages?

So far, aside from an excitable burst of speed upon hitting the highway, we sat comfortably with the radio and air-conditioner switched on and averaged 63kmh, thanks to the adaptive cruise control.

Stopping to let deprived Singaporeans have lunch at A&W in Ayer Keroh, the car revealed 141km left in the tank, a drop of 284km against 264km in real-world distance.

At this point, the heat had reached proper cooked-egg-on-pavement levels. We were not excited about being roasted under the I-Pace's glass roof, so we left the airconditioner at full blast.

That was essential because we soon ran into traffic in Seremban so bad, it barely moved for a good five minutes at one point.

The first stirrings of genuine alarm began to creep in as the range ticked down to 100km, with, well, 100km left as we inched agonisingly forward.

But the jam soon cleared and we leapt ahead with tempered relief, balancing power and range with a flex of our right foot.

We swopped drivers for the final dash, eyeballing the 86km of remaining electric range versus 50km of actual distance left.

Reaching the outskirts of KL with 67km of range left in the 90kWh battery pack, we mapped our way to the hotel but, as with all great nail-biting finales, we took a wrong turn and landed ourselves smack in a traffic jam.

"It's cool, chill," our helmsman purred. With a low-battery warning blazing in the cockpit, he nosed the car towards Hilton KL and, as we swept into the carpark, a little cheer went up.

Good as it was, the second I-Pace, driven by a Jaguar product expert, had 42km remaining.

With the rest of the day for individual R&R, the next morning saw us briefly stop at Swiss power and robotics firm ABB's Malaysia headquarters for a quick top-up and tour of KL's only DC quick-charger, and then onto that northern temple of speed for a round in the I-Pace: Sepang.

Our guide was Mr Simon Evans, the racing driver for the works Jaguar team in the one-make I-Pace eTrophy championship. 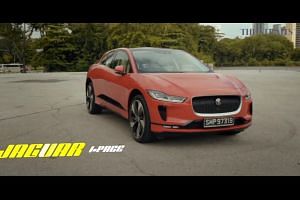 The Straits Times Car of the Year 2019: Top cars in numbers

The Straits Times Car of the Year 2019: Skoda's Octavia RS245 a winner among readers

With Mr Evans at the helm, I was glad for the crash helmet provided which hid my terrified face as he piloted the car down the straight, braking what felt like way too late, only to do it all over again. My total lack of speech during the lap, however, might have been a giveaway.

I was looking forward to driving my own lap, but race control unfortunately decided we had gone over time and kiboshed it, leaving behind one very confused driver (me) and a gaggle of flustered Jag folks.

Nevertheless, the I-Pace impressed even on the chauffeured lap. With heavy braking, the regenerative system returned quite a bit of power back into the batteries, and the car did not lose that much even though Mr Evans caned it lap after lap.

Heading back to Singapore the next day, we hijacked one of the XF support cars. That petrol goodness.

With caution thrown firmly to the wind, we reached home in record time.

The trip and the blisteringly fast Sepang lap showed us what electric cars are capable of and what they can grow into.

Battery technology is improving every day, and it is a matter of time before electric cars grow to match the range of combustion-engined ones.

Should we mourn the beginning of the demise of the petrol engine? Perhaps. But beyond that sunset comes a whole lot of fun.

• The writer is with Torque, a motoring monthly published by SPH Magazines.