TOKYO • Carlos Ghosn, the embattled auto executive indicted on charges of financial wrongdoing, has said he was the victim of "plot and treason" by other Nissan leaders who wanted to thwart his plans to bring the automaker closer to its alliance partners, Renault of France and Mitsubishi Motors of Japan.

In an interview with Nikkei Asian Review on Wednesday, his first since he was arrested on Nov 19 last year, he blamed rivals at Nissan for misrepresenting facts to prosecutors and removing him as chairman of the company he helped rescue nearly two decades ago. He said that he had wanted to unite the three alliance partners in "autonomy under one holding company".

"People translated strong leadership to dictator, to distort reality" for the "purpose of getting rid of me", he said.

Prosecutors, who have been questioning Ghosn for more than two months, have charged him with underreporting US$80 million (S$109 million) in income to the Japanese financial authorities and temporarily transferring personal losses to Nissan's books. He has spent more than 70 days in jail and been refused bail twice.

In a court appearance last month, he said he was innocent of all charges. He also promised to surrender his passports and pay for a private apartment, security guards and an ankle bracelet in order to be released while under investigation. The court deemed the 64-year-old millionaire a flight risk.

In the interview with Nikkei, which has deep ties to the business establishment in Japan, Ghosn said he had a "plan to integrate" Renault, Nissan and Mitsubishi Motors and had shared those plans with Mr Hiroto Saikawa, Nissan's chief executive, in September.

The alliance of Nissan, Renault and Mitsubishi is an industry juggernaut, accounting for more than 10 million car sales annually. The Nissan and Mitsubishi boards removed Ghosn as chairman shortly after his arrest. He resigned as chairman and chief executive of Renault last week. 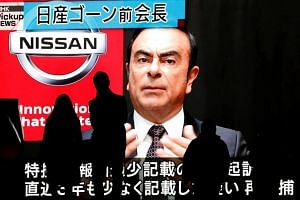 Since then, Nissan itself has been indicted on charges of financial misconduct by Japanese prosecutors in relation to the Ghosn case; the US Securities and Exchange Commission has also questioned Nissan.

The Nikkei interview was notable for Ghosn's methodical attempt to address some of the big questions - and speculation - about his financial dealings with the carmaker.

There have been steady leaks to the news media about his housing, personal finances and salary, and about whether he correctly reported his earnings to the financial authorities for several years.

Ghosn told the Nikkei reporters that he denied accusations that he had improperly funnelled US$14.7 million in payments to a company run by a Saudi businessman, Mr Khaled Al-Juffali, whom he described in his court appearance last month as a "partner" of Nissan's in the Persian Gulf region.

Prosecutors are investigating accusations that Nissan funds were used to pay Mr Al-Juffali to provide collateral for Ghosn's personal paper losses of more than US$16 million, incurred on foreign exchange investments after the 2008 financial crisis.

In an earlier statement to the court, Ghosn said that Nissan had paid Mr Al-Juffali for services to Nissan in the Middle East. In the Nikkei interview, he said "the executive in charge of the region signed" off on the payment.

Nissan spokesman Nicholas Maxfield said the company had "already acknowledged severe problems with its governance as a company".

He added: "We can't comment on the specifics of Nissan's internal investigation."

In the Nikkei interview, Ghosn denied accusations that he had improperly bought luxury homes through a Nissan affiliate, and said Nissan had approved the purchases.

"Hari Nada has done all this," he said, referring to a senior vice-president of Nissan.

He described as a "distortion of reality" reports that he had improperly received a payment of €7.8 million(S$12 million) from a Netherlands-based joint venture between Nissan and Mitsubishi. He said the venture had been set up for "synergy and not for payment".

Ghosn's interview corresponds with statements from his family members who have said that they believe Mr Saikawa orchestrated a coup against him.

In an interview with the French business daily Les Echos last month, Mr Saikawa dismissed reports that Nissan had organised a plot to oust Ghosn as "absurd", and contrary to the "serious" evidence that he said the company had gathered. He said Nissan's internal investigation into possible financial misconduct by Ghosn and his close associate, board member Greg Kelly, "suggests that we are dealing with deliberate manipulation and concealment".

Corporate governance experts have questioned how Ghosn could have acted on his own and without knowledge of other board directors. The Nikkei interview does not fully address that.

"He refers to approvals by various parties, but not one of them is on the board of directors," said Mr Nicholas Benes of The Board Director Training Institute of Japan, a non-profit group that focuses on corporate governance.

"This is strange and begs to be explained," he said. "I would like to know what each director knew, and when did they know it."