Dr Vilma D’Rozario lives in a bungalow with a garden, where she buried four of her beloved dogs when they died.

But for the last 20 years, the co-founder of a local nature education group has chosen to cremate her dead pets instead, saying: “I want remains of my pets to be with me if I should move house or decide to use the garden for another purpose one day.”

On a dressing table in her room now rest three urns containing the ashes of three mixed-breed dogs: Teva, which died in 2005 after accidentally consuming poison; Boots, which died of cancer in 2012; and Shadow, which died of kidney failure in 2013.

She says: “I would never consider throwing the carcasses in the rubbish bin because I don’t think it is respectful. And since not everybody has the luxury of space, I think cremation is the best option.”

When pets die, he adds, owners have the option to remove the carcass by cremation, burial or collection through public waste collectors.

“Very often, owners wish to retain memories of their beloved pets by having them cremated and keeping their ashes in an urn,” he says. “Owners who are unable to bury their larger pets may choose cremation as a more dignified form of carcass disposal, as compared to removal through common waste.” 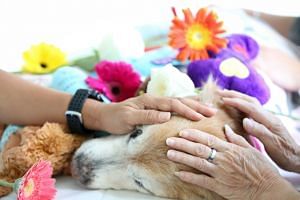 Complaints against pet cremation service providers on the rise

She says: “More people are looking to send their pets off in the same way as humans because these pets – when alive – were seen as family members.”

One of its owners, Ms Leong Foong Yee, 40, who works in the education software industry, paid more than $600 for the cremation.

She says: “Homer is part of our family, so we decided on cremation, which is just how we would send off a family member.

“We want to put the urn at home, in a spot where we can see it every day, just like how we saw Homer daily in the past.”

A version of this article appeared in the print edition of The Sunday Times on September 17, 2017, with the headline 'More choose to cremate their pets'. Subscribe
Topics:
More
Whatsapp Linkedin FB Messenger Telegram Reddit WeChat Pinterest Print Copy permalink