There is a lot more to be done to protect women and men against sexual harassment, but speaking up and sharing stories means making great strides too

A little more than a decade ago, while waiting for my A-level results, I spent a few months interning at a law firm.

With my experience in school debate and drama clubs, I was tinkering with the idea of reading law and thought it best to get a taste of it through internship experience.

As a clueless 18-year-old who had yet to even enrol in university, there was very little of substance I could contribute. But the lawyers took me along with them to court, just so I could get a taste of the whole suit-wearing, briefcase-carrying, legal-eagle experience.

It was during one such visit that I found myself striking up a conversation with an older lawyer - the opposing counsel for a matter my firm was working on. When my boss stepped aside to take a call, the two of us continued chatting to pass the time as we waited for a hearing to start.

The conversation was casual and I was excited to be making the acquaintance of someone so senior. But even I was rather taken aback when later that morning, I got a call from him on my office line, asking if I wanted to have lunch that day.

I remember stuttering a reply and then immediately checking with my boss about the protocol for the situation. He cautioned me against the meeting, perhaps because I was privy to all the information in their case files, and said if I wanted to, it would be best to meet the man professionally only when my internship was nearing its end.

For the next few weeks, I would get calls or text messages from the man daily. He was persistent in his attempts for us to meet. And when I eventually relented and met him for coffee, he offered me an internship at his firm, while in the same breath giving me numerous compliments that I deemed unprofessional and out of place.

I eventually decided to take another path in university and, over time, many polite and outright rejections later, the messages and calls stopped coming.

In the grand scheme of things, nothing unlawful took place. But in light of the numerous revelations of lewd behaviour by Hollywood producer Harvey Weinstein this past month, I have had flashbacks to how uncomfortable I felt as a teenager.

My experience might not be anything shocking compared with the stomach-churning stories from actresses that have emerged. But that does not mean it should be discounted. It does not make such behaviour okay.

Perhaps this is why this past month has been such an eye-opener for me, seeing the emergence of #MeToo go viral on social media.

On the surface, it is a mere pronoun and adverb. But when put together, it has become a revolutionary statement and rallying cry for women - and men - who have experienced some type of sexual harassment or assault.

Actress Alyssa Milano was the one who got the ball rolling on Oct 16, hitting post on the tweet that would be read all around the world. In it, she asked that women write "Me too" as a status post if they had been sexually harassed or assaulted, to give people a sense of the magnitude of the problem.

In just 24 hours, it was retweeted more than half a million times and, since then, there have been more than five million posts on Facebook using the hashtag, stemming from more than 85 countries.

I must admit that as I watched the movement grow in its infancy, I was cynical of it all. Even though I have dealt with catcalling and harassment over the years, my belief is that putting up hashtags and retweeting posts is the least you can do towards a cause, while technically not doing anything at all.

After all, how many times have we seen a cause get a huge social media push, only for it to be promptly forgotten amid a news wave of which Kardashian is actually pregnant? 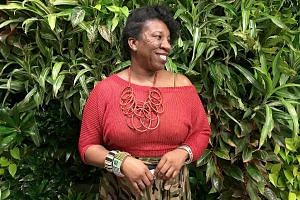 The woman who started the Me Too movement 11 years ago

But then, as the days passed and I continued scrolling and reading, it seemed like the movement was here to stay. I could not tear my eyes away from the sheer number of heart-breaking, terrifying and cathartic posts I read on my feed, from men and women alike.

There were some stories I knew of that close friends had shared over the years. But there were also posts from the most unexpected of people, sharing brief but painful stories from as far back as their childhood or teenage years.

People talked about abuse in the workplace, in crowded nightclubs or on buses, and from family members, friends and strangers. Many mentioned that they had never before shared these stories and were finally releasing years of shame, anger and regret.

For me, it is this empowering honesty and bravery that has been the game changer of #MeToo.

In a world where the Internet has become a toxic environment that pits people against one another, a pocket of safe space was created. For once, the discourse encouraged a show of hands, rather than a pointing of fingers. It became an issue of aggressors versus victims, regardless of gender.

#MeToo might not be a call to action or the beginning of a campaign. But it has allowed people to change the way they define sexual harassment or assault, moving away from antiquated thinking that experiences of harassment are private, shameful and not worthy of acknowledgement.

Before this, to declare kinship with someone who had encountered deeply damaging acts of violence seemed wildly inappropriate to me. But with #MeToo, I realised that having an umbrella of solidarity is a far more powerful testament to the magnitude of the issue than any statistic could show.

In the past two weeks, it is evident that we have encountered our own Weinsteins. And more often than not, in these encounters, we have blamed ourselves or hidden our feelings for fear of the repercussions of speaking up.

That should not be the case anymore because, evidently, people do care. People can relate. And people are not afraid to speak up.

The ultimate legacy of the #MeToo movement will be what happens next. After all, there is undoubtedly a monumental amount that has yet to be done to protect women and men against sexual harassment or predation.

Still, we would have made great strides if, moving forward, more people refuse to be silent against sexual harassment. So go ahead and go on the record. Share your stories. And call out sexual misconduct if you see or experience it.

Speaking up is the first step. It is revolutionary in its own right.

A version of this article appeared in the print edition of The Sunday Times on November 05, 2017, with the headline '#MeToo is just the start'. Subscribe
Topics:
More
Whatsapp Linkedin FB Messenger Telegram Reddit WeChat Pinterest Print Purchase Article Copy permalink