Mr Fabian Lim, 43, speaks about planes as though they are human.

"These are the first and second loves of my life," he declares of the two airplanes parked behind him.

The Internet entrepreneur, who founded home and lifestyle services app PageAdvisor.com, is in for a surprise when he steps into a hangar at Seletar Airport, where he keeps his Eclipse 500 - a five- seater jet.

He realises that the first aircraft he owned, a Columbia 350, is positioned right next to his jet in the same hangar. It turns out that the Columbia is scheduled to undergo some repairs.

"This is like my first girlfriend and I've not seen her in a while," says Mr Lim. He sold the Columbia to a friend in 2013.

"This is an emotional day for me. Two girlfriends appearing at the same time," he says.

Listening to him enthuse about flying, it is apparent that his passion for aviation extends well beyond aircraft ownership.

"I fly more than I drive," he says earnestly. "There is much freedom being in the air. I feel like a high- altitude bird." 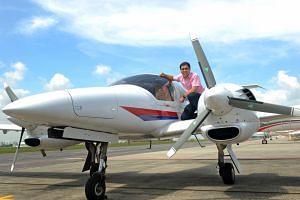 He had always wanted to be a pilot because he thought it would be "cool" to fly for a living. But short-sightedness hindered that pursuit and he put the desire aside until he felt it was "financially possible" for him to fly.

In 2006, he travelled to Seattle in the United States to get a Private Pilot Licence. He did so with ease in just 21 days.

After some years of renting aircraft in Malaysia to practise flying, he bought the four-seater Columbia in 2010 for US$400,000.

He describes the aircraft, which has a dolphin-like main body and wheel pants, as being "really sexy and beautiful".

He flew it regularly on business trips to Malaysia and Indonesia.

The longest trip he made on the Columbia was in 2012, when he spent more than a week flying from Singapore to a host of stops in Australia - "Broome, Shark Bay, Perth, Ayers Rock, Darwin" - and then back to Singapore via Indonesia.

The highlight of that trip, he says, was landing in "quaint airports" such as those in Broome and Shark Bay.

"These are airports that tourists do not usually go to, which makes them special," he says.

Everything came to a halt, however, after the Columbia was damaged while undergoing maintenance in 2013.

"I was quite frustrated and disappointed because an aircraft is not like a car, where parts can be easily replaced," says Mr Lim.

To  rub salt into the wound, the aircraft had been "functioning perfectly" before the incident happened.

"With my first girlfriend damaged, I was depressed," he says, adding that he had to go back to taking commercial flights for his business trips.

Barely weeks later, however, he set his sights on a jet - this time, an Eclipse 500, which he bought in April last year. He says this model is very fuel-efficient and can travel at twice the speed and three times the height of the Columbia.

The plane cost US$2.5 million (S$3.5 million) and he flew it back to Singapore with a co-pilot from a factory in Chicago in the US. He considers it a "heavy but worthy investment" as it is a purchase he can keep enjoying.

He lives in a three-bedroom condominium in Somerset, which he says cost about the same price as his jet.

To fly his jet back to Singapore, he had to upgrade his skills and get a jet rating. He says jet owners who can pilot their own aircraft are "quite rare in the world" because of the flying requirements involved for non-professional pilots.

He would know. He went through special training in the US to qualify to fly his jet.

"It's a very intensive programme and super stressful, but it was worthwhile," he says. "Look who's having fun now?"

Bringing the Eclipse home from the US took more than a week and saw him zipping across 16 countries for fuel stops.

What never fails to astound him are the sunrises and sunsets that he gets to witness tens of thousands of feet up in the air. "These are scenes you can't recreate. They are breathtaking," he says.

He also enjoys the unpredictability of flying - no takeoff or landing is ever the same.

He has been flying the Eclipse for close to a year and is glad he has not had any dangerous encounters so far.

He uses the jet for business trips and for leisure, taking his friends and family out of the country every three months or so. They have gone for hor fun in Ipoh and tom yum soup in Pattaya, and Mr Lim plans to do a flying tour either to Australia or Japan later this year. While those will take some time to plan, he can get clearance to fly to any airport in Malaysia within 24 hours.

He has also used the jet for humanitarian work. He did two medical relief flights in January this year, flying medical equipment to Kota Baru in Malaysia to assist with the flooding situation there.

"I treat every flight very seriously. My motto is: No mistakes," he says.

Mr Lim, who is married with no children, says he will not be setting his sights on another aircraft or jet any time soon.

A version of this article appeared in the print edition of The Straits Times on September 26, 2015, with the headline 'Love is in the air'. Subscribe
Topics:
More
Whatsapp Linkedin FB Messenger Telegram Reddit WeChat Pinterest Print Purchase Article Copy permalink