SINGAPORE - The queue for Bake Cheese Tarts at its first shop in Singapore started at 8.15am on April 29, almost two hours before the shop at B4 of Ion Orchard opened.

By the time it did, there were at least 30 in the queue. Although staff told customers the wait would be more than two hours, many stayed on.

Bake Cheese Tart is from Hokkaido, Japan, and is famous for its mousse-like cream cheese filling and crisp pastry.

Finance analyst Sherman Wong, 30, was one of the first in the queue, arriving at 8.30am. 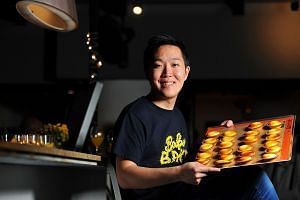 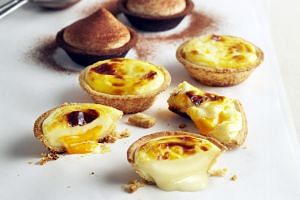 "My wife's colleague tried it in Japan. He's not the kind to eat a lot of nice things at one shot, but he ate six of the cheese tarts at one go, so the expectation is high. Now that it has come to Singapore, hopefully the quality is good."

Immediately after buying the tarts, he ate one.

"It's soft on the inside, crispy on the outside, and it's not very sweet. Most importantly, you can taste the cheese inside, which is the key point of the tart," he said

Others who had tried the tarts elsewhere raved about them too.

"I normally don't eat sweets, but the tarts are rich, yet not cloying, so I find myself having a few even though I don't really eat desserts," said Ms Sandra Chia, 27, who owns a party supplies business.