Markus Zusak's long-anticipated novel Bridge Of Clay is the story of an Australian family of "ramshackle tragedy... Our mother was dead./ Our father had fled".

These are the words of Matthew, the book's narrator and the eldest of five sons in the Dunbar family. We are told that this is the story of his younger brother Clay, but the book extends far beyond him, with a broad sweep across countries and generations.

The five Dunbar boys are a raucous bunch. Their mother, Penelope (Penny), fled the Eastern Bloc and brought with her a love for Chopin and Homer's Iliad and The Odyssey. When she dies, her husband Michael walks out on his family, but later reconnects with them and builds a bridge across a dry riverbed with Clay.

Bridge Of Clay is a moving, incredibly human piece of work. And at nearly 600 pages, the novel - which took Zusak more than a decade to write - is also a baggy collection of character narratives and flashbacks. Here, as in life, memory is not linear but tangled and muddied. There is, of course, method to the book's seemingly haphazard structure. Zusak is a supremely sensitive writer and no image is out of place - be it the keys of Penny's piano or those of the bullet-grey Remington typewriter owned by Michael's mother.

By providing us with the backstories of Penny and Michael Dunbar, the narrator suggests that we are the sum total of not just our past experiences, but also our parents'. This is reflected in the novel's section headings, which are cumulative in nature - the eighth and final part is titled "cities + waters + criminals + arches + stories + survivors + bridges + FIRE".

If - and this is a big "if" - the reader manages to get through the story's rather bewildering early pages, he will find himself in spellbinding territory. The chapters devoted to Penelope's exit from Eastern Europe and Michael's ill-starred relationship with his first wife Abbey are particularly heart-wrenching. 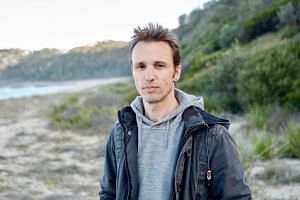 Bridge that took 20 years to build

"He remembered times when the entire Friday-night cinema laughed, when he'd laughed, and Abbey sat watching, unfazed," writes Matthew, charting the disintegration of this love affair. "Then, when the whole brigade of movie-goers was dead-silent, Abbey would smile at something private, just her and the screen. If only he could have laughed when she did, maybe they'd have been okay."

Bridge Of Clay may be a long read, but it is worlds apart from the maximalist fictions of great male narcissists such as David Foster Wallace.

While it will not be the most exciting thing you would read this year, there is something to be said for Zusak's generosity as a writer, the novel's emotional elegance and its portrayal of the forces that shape our ends.

If you liked this, read: The Book Thief (Transworld Publishers, 2005, $17.76, Books Kinokuniya), Zusak's best-selling novel, set in Nazi Germany, where Death narrates the story of a girl called Liesel.