A project that received the backing of Swiss banking giant UBS has allowed star photographer Annie Leibovitz to revisit a body of work she started 15 years ago.

The result can be seen in Women: New Portraits By Annie Leibovitz.

As part of a global tour covering 10 cities, the show arrives here after stops in London, Tokyo and San Francisco, after which it will travel to Hong Kong, Mexico City, Istanbul, Frankfurt, New York and Zurich.

The exhibition opens at Tanjong Pagar Railway Station next Friday and runs until May 22. 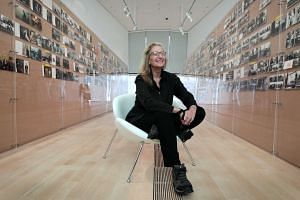 In a media statement, Leibovitz, 66, says: "When I asked UBS about updating the Women's project, there was no hesitation. They said let's do it and they have been extraordinary in every way. It is such a big undertaking and a broad subject, it is like going out and photographing the ocean."

She describes the project as "a work in progress" and adds: "It is amazing to be continuing these pictures and to be able to return to a project I loved."

Her subjects have always been diverse and what has set a Leibovitz portrait apart has been her ability to capture each subject's uniqueness.

In the 1970s and early 1980s, as the chief photographer for music magazine Rolling Stone, she made a name for herself with her unconventional and often cutting-edge portraits. She went on to work for Vanity Fair and Vogue magazines.

Among her iconic images is that of a naked John Lennon kissing his wife Yoko Ono, taken five hours before the singer, songwriter and former Beatle was assassinated in 1980.

None of the images are for sale. The new photographs form part of the UBS Art Collection. The exhibition also includes work from the original series, as well as other unpublished photographs.

In an e-mail, Mr Edmund Koh, 56, head wealth management for Asia Pacific and country head of UBS Singapore, called the partnership with Leibovitz "a great fit". "Like Annie, UBS believes in the importance of supporting women who are making an impact in their fields. We wanted to preserve the inclusive nature of this project and to allow as many people as possible to enjoy the newly commissioned series."