Wakanui is not new to Singapore. The steakhouse, a branch of the Tokyo restaurant that specialises in New Zealand beef and lamb, had opened in Boat Quay in 2014, but made a quiet exit not long after.

It's back, this time as a franchise, in the spanking new Marina One - the first restaurant to open in the office-cum-residential complex.

The premises are swankier than the previous converted godown by the Singapore River. The fourth-floor restaurant is built as a stand-alone structure in an open area and its entrance is surrounded by lush greenery that makes you forget you're in the heart of the business district.

Inside, it's a mix of rusticity and modernity, with brick walls on one side and glass windows on the other that offer a view of an airy concourse. The kitchen is visible from the dining room too, behind a glass panel.

What has not changed, however, is the food.

Wakanui specialises in Ocean beef from New Zealand, which is developed for the Japanese palate that favours the tender meat of grain-fed cows. There are three choices: sirloin, ribeye and a 21-day dry-aged bone-in ribeye.

But for those who prefer leaner meat, the menu also includes a Canterbury grass-fed fillet. And at the other end of the scale, there is an Ito wagyu fillet from Japan for fans of well-marbled beef.

I'm not a fan of wagyu when it comes to steaks though. It's not that I'm not a fan of marbled meat, but all that fat is best enjoyed in small quantities as part of, say, a teppanyaki or shabu-shabu meal.

When it comes to a 300g piece of steak, ribeye is my cut of choice for its balance of fat and flavour. Sirloin is okay too, when I feel like a leaner cut. Fillet or tenderloin, however, bores me because of its monotonous texture and blandness.

In the case of Wakanui, however, I find that I prefer the Canterbury Grass-fed Fillet ($78 for 250g) to both the Ocean Beef Ribeye ($79 for 350g) and the Dry-aged Bone-in Ribeye ($199 for 1kg). It requires a bit more chewing, but you are rewarded with a bit more flavour too.

The Ocean beef, in comparison, is bland, even though it has been wet-aged for four weeks and dry-aged for another three 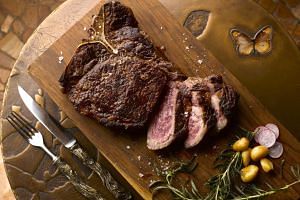 Adding a touch of the accompanying salt, wasabi or Wakanui sauce - a pleasant blend of soya sauce, garlic, mirin and seaweed, among other things - helps. But I'd prefer to taste the meat.

So overall, I am not a fan. The pleasure of biting into a full-flavoured piece of tender and juicy meat is what I look for in a steak. And for that, nothing beats a medium-rare piece of United States Department of Agriculture Prime ribeye.

If you are a fan of American steaks, Wakanui is not for you. Go only if you like your beef mild and tender.

I've always liked New Zealand lamb, though, because it is tender and tasty, without the gaminess that puts many people off the meat.

In my review of the first Wakanui in 2014, I favoured the lamb over the beef. I still do. The Wakanui Spring Lamb ($42 for half rack) is nicely seasoned and grilled, and the meat is moist and very tender.

A colleague finds it a bit too mild and wonders if it would be more flavourful if the lamb is allowed to grow longer than the six months when it is slaughtered.

I agree that a bit more flavour would make it even better. As another friend used to say, what's the point of eating lamb if it doesn't taste of lamb?

Besides the meats, the menu also offers a couple of salads and some seafood items. Try the Seasonal Hassun ($32) - a trio of Japanese starters such as tomatoes, cured salmon and deep-fried asparagus - if you do not mind the high price for the little bit of food.

I find the Hot Smoked Salmon ($24) to be better value. The New Zealand salmon is a bit salty, but that is mellowed out by the French beans and diced tomato topping it. And the oily fish has a smooth texture that I like.

The Steamed Green Lip New Zealand Mussels ($22) sound really expensive when you are told that there are only four shellfish in the dish. But they are huge so I wouldn't call them overpriced. Cooked in white wine flavoured with lemongrass and cardamom, they are delicious, so I'd recommend them too.

The dessert to order is the hokey pokey ice cream ($14), consisting of a scoop of vanilla ice cream with crunchy bits of honeycomb toffee. It may not be very creative, but the combination works.

So I'll be happy to go back to Wakanui. Even though it won't be for the beef.

•The Sunday Times paid for the meals at the eateries reviewed here.