In a video clip uploaded on Saturday (April 27), the 38-year-old singer wrote, "I heard that we amassed 50 million (followers). How could it be that fast? But it's okay, I will keep my promise since we have hit our target - I am a man of my words!"

The most handsome Singaporean man on an Asian list then took off his shirt, revealing his chiselled physique - six-pack abs and biceps that he had painstakingly trained for.

He then shyly moved on to lift some weights.

Seemingly embarrassed to be half-naked on video, JJ added that he "wishes for everyone to place more focus on (his) music".

"I want to do something different if we reach 60 million followers - I will hold a charity fan concert," said the Mandopop star.

Three hours after it was shared online, the one-minute clip garnered 1.4 million views, with many fans complimenting him for his good physique. 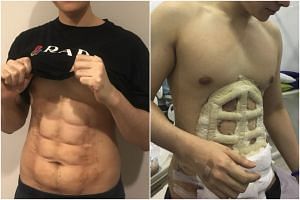 JJ Lin had previously promised his fans during his Sanctuary 2.0 concert in Suzhou that he will show them his abs if he gets 50 million followers on Weibo.

Prior to this bare-it-all video, JJ had posted a sneak peek of his well-built body earlier this month.

Fans sure are glad to finally get a glimpse of what laid beneath those mosaic tiles.