When does a habit become an obsession? When you deny that something is wrong

In order to have a more harmonious marriage, H and I have decided that we need some rules.

Recently, we came up with Rule No. 1: You can only repeat something once.

It's been really helpful in keeping the nagging level of our marriage down.

In the past, we would nag at each other quite a bit.

"Remember to buy the dog food", I'd tell him.

"The dogs have no food", I'd give yet another reminder.

For good measure, I'd send him a reminder via WhatsApp too.

It's enough to drive a couple crazy.

With Rule No. 1, we now have only two goes at saying the same thing.

It has worked so well we thought we should introduce more rules.

A few weeks back, he suggested Rule No. 2: No Googling and checking of e-mail at the dining table and just before we sleep.

What a ridiculous rule, I said. It'll be impossible for me to agree to it and it's not fair because it's targeted at me.

How can I not be checking my e-mail all the time, I continued. I am a journalist. I must know what's happening and I must be contactable 24/7. What if a story breaks? I need to know at once.

I was, of course, exaggerating my own importance.

The world and the newsroom chug along just fine whether or not I am online. My bosses don't expect me to be constantly connected (I think).

I was using work as an excuse. An excuse for an affliction I am finally coming around to acknowledging, but which H has noticed for some time: I have an addiction.

I have an addiction to Googling, to my smartphone, to my iPad, to being connected to the digital world.

My phone follows me everywhere I go. I sleep with it inches away from my pillow and my nights (as well as his) are punctuated with beeps, blips and pings from the many message notifications streaming in.

I check my phone goodness knows how many times a day, to look at my e-mail, WhatsApp, Telegram, Twitter, Facebook, Vine, Instagram and a few other apps.

When I'm at the cinema, I'm one of those irritating people whose phone screen lights up during a movie because I'm checking it.

I literally break out in a cold sweat when I misplace my phone.

At home, I walk around not only with my phone but also my tablet.

I am addicted to Googling on my iPad. I can spend an entire day in bed just Googling (oh, bliss). Sometimes, when the Wi-Fi speed is acting up, I Google on both my phone and tablet at the same time, just in case one gets to the information I want quicker. 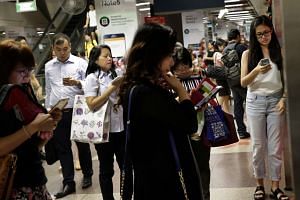 Millennials in Singapore spend almost 3.4 hours a day on their mobile phones: Study

To prove my point, I went onto Google (of course) to try out some are-you-an-Internet-addict tests.

On one quiz, I scored 71 points, which was on the high end of the moderately addicted scale.

The results said: "You are experiencing occasional or frequent problems because of the Internet. You should consider its full impact on your life."

Another test also put me in the moderate range and had this advice: "Turn your cell phone off for a few hours and see how that feels." (Unbearable, I'm sure.)

The most helpful article I came across was in Yahoo by Dr James Roberts, a professor of marketing at Baylor University in Texas in the United States.

He explained that anything that can produce pleasure in our brain has the potential of becoming addictive and what makes something an addiction is when we lose control.

Research, he said, has identified "six signs" of any type of substance or behavioural addiction.

He set out 12 statements on mobile phone usage which capture these six signs and you are supposed to agree or disagree with them.

1. The first thing I reach for after waking in the morning is my cell phone.

2. I would turn around and go back home on the way to work if I had left my cell phone at home.

3. I often use my cell phone when I am bored.

4. I have pretended to take calls to avoid awkward social situations.

5. I find myself spending more and more time on my cell phone.

6. I spend more time than I should on my cell phone.

7. I become agitated or irritable when my cell phone is out of sight.

8. I have gone into a panic when I thought I had lost my cell phone.

9. I have argued with my spouse, friends, or family about my cell phone use.

10. I use my cell phone while driving my car.

11. I have tried to curb my cell phone use, but the effort didn't last very long.

If you have eight or more "agrees", you have an addiction, said Dr Roberts.

I scored nine. I have a problem.

But the situation isn't that dire, I'd like to think. For example, it hasn't reached a stage where I "prefer the excitement of the Internet to intimacy with my partner", which was what one article said could happen.

Still, I shouldn't be complacent. It can't be pleasant living with someone who doesn't give you her full attention because her nose is always stuck in a screen.

It is also rude.

At work, I have got into the bad habit of not looking at colleagues I'm talking to because I'm also typing away on my phone or computer.

At meetings when I'm just the slightest bit bored, I find it hard to resist reaching for my phone and checking my e-mail, which is impolite to the person who's speaking.

My attachment to my devices can be dangerous - I walk and text a lot. The intense and constant staring at screens is causing eyestrain.

Studies have also found that the Internet is harming our memory, especially short-term or working memory.

Information overload and distractions - hallmarks of Internet surfing - make it harder to retain information in our brains.

When we know a digital device holds information for us, we are also less likely to remember it ourselves. It has been years since I memorised anyone's telephone number. I'm not even sure I can do it now.

Having so much information at my fingertips has made my brain lazy and mushy. If I want an answer to a poser (who won the 2006 World Cup?), I don't try to work it out in my head anymore - I just click on the Internet.

Google makes you feel clever when you really aren't.

Also, while social media like Facebook have been praised for bringing people closer, they can in fact isolate us when we use them in place of face-to-face interactions.

Because I know what's happening in my sister's life through her Facebook, I see no need to pick up the phone and actually talk to her. I'm not sure that makes for a healthy relationship.

As for H and me, I think I should agree to some version of Rule No. 2 if I want a happier marriage.

Totally no Googling and checking of e-mail at the dining table and just before we sleep might not be doable.

But I can live with "less" Googling and checking of e-mail.

One step at a time.

A version of this article appeared in the print edition of The Sunday Times on November 22, 2015, with the headline 'It's time to switch off'. Subscribe
Topics:
More
Whatsapp Linkedin FB Messenger Telegram Reddit WeChat Pinterest Print Purchase Article Copy permalink