Parents whose sons have longer-than-usual tresses say the look is cool, never mind if people mistake the child for a girl

This is a question posed repeatedly to stay-at-home mum Arpana Vedi when strangers see her only son, 2½-year-old Romir.

Romir has long, curly hair down to his shoulders. Sometimes it hangs free, sometimes his mother styles it in buns. Combined with his large, manga eyes, the hairstyle gives him a cool androgynous look.

His mum loves boys with long hair. But people around her seem to disagree. For example, relatives often give her well-meaning but unsolicited counsel about the impracticality of long hair in hot weather.

"I've been asked by strangers like 1,000 times if Romir is a girl, in spite of him being dressed like a boy. It makes me question my decision sometimes," says Mrs Vedi, 29. "But then again, my kid, my rule."

It makes me question my decision sometimes. But then again, my kid, my rule.

MRS ARPANA VEDI on being asked by strangers if her son Romir, 2½, is a girl

Her husband, a procurement officer for an oil and gas company, keeps his hair short.

Long hair on boys became an issue recently when a pre-school teacher punished a six-year-old boy with longer-than-usual tresses. She reportedly made him stand in front of his class and put on a girl's hair clip.

The episode sparked outrage among people who felt it was cruel to embarrass a child for his appearance and for its rigid gender stereotyping.

Parents may experiment with their sons' hairstyles, but social norms remain powerful about the "right" hair length for boys. 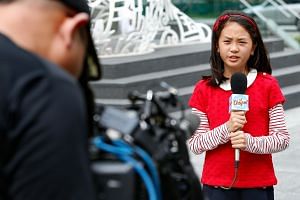 Life as a child actor as demand grows for stage, TV and movies

Mrs Vedi, for example, says she might trim her son's hair "a bit" when he turns three and goes to pre-school, as "most schools would not prefer long hair on boys".

Matthias Ong, aged 2½ and who is in childcare, also has long hair.

His mother, business development manager Priscilla Chan, 33, says that since parents dress up their daughters, parents can also have fun dressing up their sons.

When Matthias lets her, she styles his hair into a man bun or stuffs it under a beanie. Her husband is a pilot who keeps his hair short.

She plans to let Matthias keep the hair for a few more months before letting him try another hairstyle, possibly a shorter one. The point is experimentation, she adds. "This sums up how we hope to raise him, to be a broad-minded individual who is open to different experiences."

Mothers tend to have more say over their sons' appearances, but in six-year-old Lloyd Loh's case, it is the father who wants the flowing locks.

Freelance music teacher Richard Loh, 42, has been letting his youngest child keep his hair at shoulder- length since he was three because the hairstyle looks "cute and cool".

If he had a choice, his son would have even longer hair, but his wife, a logistics programme manager, says the maximum is shoulder-length. Lloyd's two older sisters, aged eight and 10, have bobs.

For Mr Loh, it is no big deal for guys to have long hair.

Now sporting an ash-grey cropped hairstyle, he used to have long hair in university. At the international school where he used to teach, it was common for boys to sport long hair.

Pre-schools here say they do not dictate how long a child's hair should be.

A spokesman for PAP Community Foundation, which runs 378 pre-schools in Singapore, says: "Our focus is mainly on health, hygiene and safety. Living in a diverse society, we understand that there could be religious or personal reasons for the varying lengths of hair."

Another pre-school, Two By Two Schoolhouse in Telok Kurau, says parents have the final call. Its director Li-Anne Sia says: "If the long hair interferes with the child's vision or learning, we would highlight this to parents and encourage them to trim their child's hair, but the final decision still rests with the parents."

Still, gender stereotypes have made some parents question their decision to go against the grain.

Ms Chan says some people assume her son is a girl and refer to him as such.

Her main concern is whether such assumption would confuse Matthias about his gender.

She says: "I would check with him now and then by asking him, 'Are you a girl or a boy?' So far, he has answered correctly every time."

Dr Lim Boon Leng, a psychiatrist from Gleneagles Hospital Singapore, says there is no need to worry about gender confusion.

Gender dysphoria, a condition where people feel strongly that they are not the gender they physically appear to be, is almost certainly inborn, he says.

In other words, keeping long hair will not predispose a boy to the condition.

Dr Lim says the length of hair itself should not have any impact on a child's psychology. He adds: "However, if the child is bullied and being called names, he may feel embarrassed and judged and may shy away from playing with other kids. This may develop into social anxiety if the bullying or name-calling is prolonged or excessive."

Mr Loh says that, so far, Lloyd has not been bullied or called names. He says: "He does get a bit annoyed when some older boys in his music enrichment class insist that he is a girl, even though he has told them he is a boy."

But he sees all these as teachable moments. "I always tell my son you cannot control what others do, but you can control what you do."

He says Lloyd handles questions about his hair confidently. "When people ask him if he's a girl, he would tell them, 'No, I am a boy.' If they ask why he has long hair then, he would say, 'Because it looks cool.'"

In fact, Lloyd has grown so attached to his hair that Mr Loh is worried he might resist cutting it before he enters primary school next year. He says: "We have started preparing him for it and he seems to understand that he has to do it because that's the rule in primary schools."

Most parents remain conservative about long hair for boys.

Stay-at-home mother Alamz Ng, 46, did not let her son Jordan have long hair when he was young. "I am quite traditional and I feel boys should have short hair," she says. "Also, short hair is easier to manage."

Now 17, Jordan wants to grow out his hair after junior college and before he enters the army.

His mother says: "Now that he is older and has his own thinking, I will not stop him from doing what he wants, as long as it's not against the rules of any institution."

A version of this article appeared in the print edition of The Sunday Times on August 21, 2016, with the headline 'Is that a boy or a girl?'. Subscribe
Topics:
More
Whatsapp Linkedin FB Messenger Telegram Reddit WeChat Pinterest Print Purchase Article Copy permalink