Park Mall, the popular destination for home furnishings in Penang Road, will put up its shutters for good come end of September.

Many of its retail tenants have already found new homes while signs stating "Moving Out Sale" hang in the windows of some stores.

Park Mall's closure comes after it was bought for $411.8 million by a joint venture group last December. Suntec Real Estate Investment Trust, which acquired the mall in 2005 and also owns Suntec City, is part of the joint venture company.

The mall, which sits just outside the main Orchard Road shopping belt, will be demolished after its tenants move out. Two office blocks with a retail component will be built in its place. Besides furniture stores, Park Mall also has other businesses, such as clinics and offices, spread beyond the retail floors from the sixth to 15th level. There are also eateries on the first four levels and in the basement.

Furniture retailer Xtra, one of Park Mall's oldest and best-known tenants, which sells American office furniture brand Herman Miller, among others, will move to a single-level 13,000 sq ft store in the new wing of Marina Square in September.

Kith Cafe, which is next to Xtra on the first level at Park Mall and has been there since 2012, will share part of the new Marina Square unit. 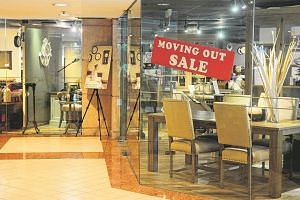 From fashion haven to furniture hub

Moving out of Park Mall is bittersweet for Xtra's founder, Mr Lim Choon Hong, who opened his store there 23 years ago.

Friends had advised him against going to the mall, which was positioned as a fashion mall. "But I went in anyway as an electronics store called Peter Chew did a roaring business," said Mr Lim, who has another Xtra store nearby in Killiney Road.

The mall became furniture-focused in 1995, and many tenants said that positioning has worked to its advantage.

Mr Au Da Yu, 35, the Asia-Pacific director for The Bear Knows, which sells high-quality made-in-Europe furniture, said: "It is quieter than the lifestyle malls like Ion Orchard or VivoCity but shoppers who come to Park Mall are very specific. They are looking only for furniture."

The Bear Knows will move into a 2,500 sq ft store at The Centrepoint in Orchard Road in September.

Ms Kerine Yong, marketing and country manager at modern contemporary furniture store Cellini Design Center, which has had an outlet in Park Mall for more than a decade, said: "Park Mall is our best-performing store. As it's in town, we also get the expatriate crowd. It's close to the MRT station and easy to find. It might be difficult to draw these customers if we were elsewhere."

Cellini Design Center has five other outlets aside from Park Mall. There are no plans to replace the Park Mall store for now.

At least one retailer, lighting shop Blackhole Lighting, is moving its operations online from next month.

For now, many tenants are ending their run at Park Mall with moving-out sales. Brands such as Castilla, which sells Italian and German luxury furniture; home-grown label Scanteak which moved into the mall in the mid-1990s; Blackhole Lighting; Cellini; and Xtra are all selling furniture and accessories at discounted prices.

One regular customer, Mr Randy Yeo, 32, who owns a chain of food outlets, is sad to see the mall go. He said: "Park Mall is a one-stop solution for everything...I will miss it. There's no other furniture place like this."

A version of this article appeared in the print edition of The Straits Times on July 09, 2016, with the headline 'Park Mall to shut at end of September'. Subscribe
Topics:
More
Whatsapp Linkedin FB Messenger Telegram Reddit WeChat Pinterest Print Purchase Article Copy permalink