If you are a close family member of 83-year-old Syed Yusof Alsagoff, chances are you have had an orchid named after you.

The self-taught orchid breeder has registered 230 hybrids so far, some 30 of which carry his relatives' names. He has developed many more that are still unregistered.

An example is the violet-blue Aranda Noorah Alsagoff, which was named after his daughter and is on display at the Singapore Garden Festival's Orchid Show.

Another is the yellow Aranda Zaleha Alsagoff, named after his wife. The flower, which he registered in 1991, earned Mr Yusof a First Class Certificate from the Singapore-based Orchid Society of South East Asia.

"I want to create something different, something lasting," Mr Yusof tells The Straits Times at his home garden in Siglap, which is filled with hundreds of orchids.

Thanks to the influence of his grandfather, who enjoyed gardening, he started growing roses as a teenager. But orchids eventually won his heart because they are "more lasting".

I want to create something different, something lasting.

Mr Yusof, who helped manage the Alsagoff family estate before retiring, joined the Orchid Society of South East Asia in the late 1950s and later became its president.

The long-time National Parks Board volunteer has also helped to conserve heritage orchids through cloning and propagation. This helped contribute to the successful inscription of the Botanic Gardens as a Unesco World Heritage Site.

In the 1950s, he recalls, it was challenging learning how to hybridise orchids, given limited information and resources. Mr Yusof, who had a laboratory in his house where he would germinate seedlings in sterile conditions, says it has been "100 per cent trial and error".

What frustrated him, he says, were hobbyists who did not want to share what they knew with others.

These days, he advises new orchid breeders to get a good grasp of the basics, expose themselves to people in the know and get good parent plants.

Study the Royal Horticultural Society hybrid list and buy good parent plants off people who are willing to part with them, he adds. 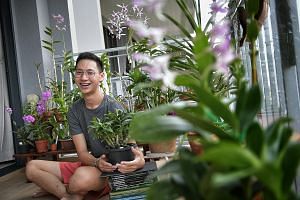 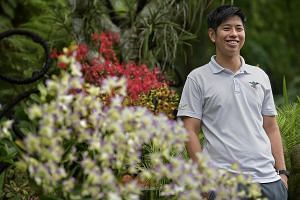 Re-potting orchids after work until 1am

"Be friendly to people and visit shows and orchid nurseries," says Mr Yusof, who visited forests in the Philippines, Indonesia and Malaysia to collect plants in the 1970s.

Patience is also key. It can take seven to eight years before you see results, he says.

Mr Yusof and his wife, who helps him in the garden, have four children, 10 grandchildren and one great-grandchild. Two of their sons are in the landscape business.

He says the lack of space should not get in the way of people growing orchids in high-rise apartments.

About 25 years ago, he started to hybridise plants to miniaturise them, resulting in shorter, more compact hybrids such as the Dendrobium Milo.

While he hopes to see more young people breeding orchids, he adds: "It's about passion. Don't aim for money."

A version of this article appeared in the print edition of The Straits Times on April 21, 2018, with the headline 'Naming orchids after loved ones'. Subscribe
Topics:
More
Whatsapp Linkedin FB Messenger Telegram Reddit WeChat Pinterest Print Purchase Article Copy permalink