Expect interactive displays and quirky installations at this year's SingaPlural, which is bigger than last year's event

Paper cockroaches, goldfish plushies, a "forest" made with white cloth and artificial smells - these are some of the highlights at the upcoming design festival SingaPlural.

Running from Monday at the former Beach Road Police Station for a week, the festival features more than 70 installations, with the line-up of designers spanning different fields from architecture to product design to fashion.

This edition of the festival is bigger, with more than twice the number of exhibits from last year and international designers for the first time.

The roaches are by Hong Kong's Stickyline, who is known for its designs folded of paper. In Scale Up Your Fear, origami cockroaches crawl out of a black hole and up the walls and floors.

The cotton-stuffed goldfish plushies are the work of Malaysian doll-maker Yeo Mei Ying, who goes by the label Evangelione. Her exhibition, The Fish Tank, turns a room into a larger-than-life fishbowl, with goldfish toys hung like mobiles.

The magical "forest" is by Chan Wai Lim, 42, founder and principal designer at Trigger Design, a product design studio.

The project is a collaboration with AllSense, a sensory and scent consultancy. Strips of white fabric are draped across the room to mimic a forest setting, while smells that evoke memories of nature are released into the space.

SingaPlural, now in its fifth edition, is co-curated by design studio Plus Collaboratives and creative communications agency Govt.

The event, which costs about $1 million, is organised by the Singapore Furniture Industries Council. It is the anchor event for Singapore Design Week, which showcases good design in exhibitions and talks and runs from March 8 to 20.

This is the first time SingaPlural organisers are charging for the event. Tickets cost $5 each before the event starts on Monday and $10 during the show.

Mr Mark Yong, 37, chairman of SingaPlural and vice-president of the Singapore Furniture Industries Council, says that almost 5,000 tickets have been snapped up since last Sunday. The tally counts tickets that have been paid for and complimentary ones that were given out to students, children and teachers, among others.

Spread out across rooms on two levels and outdoor spaces at the former police station, this year's exhibits play on the theme, Senses - The Art & Science Of Experiences. And the curators promise interactive displays that will get visitors working their five senses.

For example, branding agency The Workbench, media production company Fluttersound and programmer Reza San have collaborated on an interactive sound installation: In an empty room, visitors have to move around to alter the noise in the background.

The Endangered, the other project of Trigger Design's Chan, is an animal-themed range of musical jewellery boxes made of different materials and are scented.

This is her second time showing at the festival. She enjoys the idea that designers from different disciplines could showcase their work together and exchange ideas. "It was also good to talk to members of the public and they got to understand what designers do."

The festival has also attracted young designers who are just starting out. For junior industrial designer Ng Siang Joo, 21, participating in SingaPlural gave her a chance to try making furniture.

Her Nua Stool Series - five stools of various heights and different leg contours - came about after she studied people's posture and demeanour when they are relaxing. "Nua" is Hokkien for slacking off.

The chairs, which are made in Indonesia, have steel legs and teak seats. Some of the legs have horizontal supports for users' feet, while other seats are tilted to let users half-sit and stand at the same time. 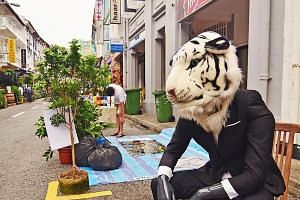 Eight things to see or do

Besides installations, there are also workshops on crafts such as casting a concrete tray or carving a wooden spoon.

Visitors can also attend talks by designers such as Mr Alvin Tan from home-grown outfit Phunk Studio and Tokyo-based Japanese designer Satsuki Ohata. They will share their insights about working in the design industry and creating experiences using design.

Those who want to continue the SingaPlural experience beyond the festival grounds can hop on a bus to check out spots around Singapore that relate to the festival's theme. There are four tours, which will stop at spots such as furniture store Xtra in Park Mall and coffee-brewing equipment company Knockhouse Supply Co in Owen Road.

Finally, visitors can also buy products from retail stores such as multi-label store Naiise and Souvenirs from Singapore, which will set up pop-up shops there.

Festivalgoer Yu Qinyan, 27, who attended last year's SingaPlural, is looking forward to this year's show, even though she now has to pay.

She says the festival has come into its own, "making design accessible and giving local designers a platform to show their creativity".

The senior marketing and communications executive adds: "If you would pay to go to a museum overseas or an art show, why not SingaPlural? The content is just as good. Anyone who is passionate about design would want to go."

• Tickets are on sale at singaplural2016.peatix.com. Go to www.singaplural.com for more information about event's schedule.

A version of this article appeared in the print edition of The Straits Times on March 05, 2016, with the headline 'Design for the senses'. Subscribe
Topics:
More
Whatsapp Linkedin FB Messenger Telegram Reddit WeChat Pinterest Print Purchase Article Copy permalink