An online article on food security that Mr Deane Cheng read got him thinking about where his food comes from.

Mr Cheng, 30, a co-founder of a creative consultancy, says: "Most of the time, we don't know where our fresh produce is imported from and if it is free from pesticides or chemical fertilisers. I became interested in having more control of what I put on my plate by growing my own food."

He visited farmers' markets, attended a few workshops at Citizen Farm and started growing his own pots of edibles such as basil, mint and mushroom. Citizen Farm is part of Edible Garden City, which is a strong advocate of the grow- your-own-food movement here.

Mr Cheng is one of many people here who have signed up for urban farming courses to learn how to grow their own food.

The year-long course will go into the basics of sustainable urban farming and how to run an agribusiness. It is targeted at both hobbyists and professionals.

Mr Darren Ho, 28, head of Citizen Farm, says: "We want to build a pool of people who are passionate about urban agriculture and farming and let this talent pool be the bedrock of the agriculture industry in Singapore."

Besides the National Parks Board, there are at least six other organisations and companies here that offer workshops on edible gardening and farming.

These range from short workshops of a couple of hours to those that total 12 hours and go into details such as soil science and propagation techniques.

The Plant Story, an urban gardening lifestyle company founded in 2009 by Ms Cath Lim, 43, a certified horticulturist, started offering urban farming workshops two years ago when "many customers, mostly working adults and families with young children, came to us wanting to grow their own food".

She adds: "But they have unrealistic expectations on how to go about doing it. For instance, they think that growing plants do not require much light, water and time."

Her company's workshops, each of which lasts about 1½ hours, seek to clarify these misconceptions and teach the basics of growing edibles at home, including what plants to choose, lighting requirements and time commitment needed.

There can be as many as one to two workshops during the school holidays. Each workshop sees two to 10 participants.

Carbon InQ, a nature education and consultancy company, has been conducting a series of gardeners' workshops, comprising basic, intermediate and advanced levels, under its Centre for Nature Literacy and Enterprise, since April.

Each level comprises 12 hours of practical and theory lessons and teaches horticulture techniques on growing ornamental and edible plants.

Mr Alexius Yeo, 32, who founded the company in 2015, says that many people now want to use fresh herbs and organically grown vegetables in their cooking, due to "a growing awareness of the need to take proactive steps towards ensuring personal health and a more sustainable lifestyle".

However, he warns enthusiasts that growing plants successfully requires dedication because the learning curve is steep.

"It is difficult to grasp the many techniques of growing a wide variety of plants simply by attending a two-hour workshop," says Mr Yeo, who holds a certificate in permaculture design from the Permaculture Research Institute in Australia. Permaculture is a holistic design methodology for building sustainable farms and society.

The response to the twice- monthly workshops he runs has been "very good". They draw mostly professionals as well as some students and retirees. Each class takes up to 25 students and is always almost full, he says.

Retired secondary school teacher Saleha Jumat, 69, took one of the classes. For years, she had been trying to grow plants such as lime and herbs such as mint and rosemary to use in her cooking.

"But after a few months, many of them withered and died while the ones that survived didn't look very healthy."

So when she came across an advertisement in April about Mr Yeo's workshop on her Facebook newsfeed, she signed up for it.

Her plants have been thriving since. She says: "I was using burnt clay, which I learnt at the workshop may not be suitable by itself for growing plants." 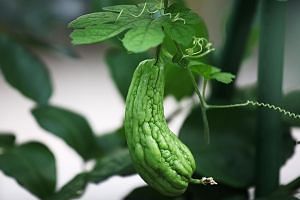 Getting kids involved in gardening

Where to learn urban farming

She learnt that it was better to use topsoil, the fertile upper part of the soil, and mix it with compost and inorganic soil additives such as perlite and vermiculite.

Gardens With Purpose, an urban organic gardening company founded in 2010 by Ms Joanne Ng, 54, leads trips to Chiang Mai in Thailand for participants to learn more about organic farming.

It is a collaboration with Maejo University in Chiang Mai and includes practical and theory lessons taught by professors from the institution's organic agriculture department, as well as visits to organic farms.

Says Ms Ng: "A lot of gardeners here wanted to see how organic farming was done hundreds of years ago, using mainly fermenting and composting. They also like Thailand and the food there. So I decided to combine the two."

A version of this article appeared in the print edition of The Straits Times on September 22, 2017, with the headline 'Grow your own food'. Subscribe
Topics:
More
Whatsapp Linkedin FB Messenger Telegram Reddit WeChat Pinterest Print Purchase Article Copy permalink