Rehabilitation gloves, home automation systems and toys for the blind are among assistive design products to improve the lives of people with disabilities

Ms Jane Wang gives an emphatic "yes" when asked if design can change the way people with disabilities and the aged live, work, play and learn.

After all, she is the co-founder of home-grown medical robotics start-up Roceso Technologies, a world pioneer in soft robotic exoskeleton technologies. On Wednesday, she appeared on American news television channel CNN, talking about her company's "soft robotic glove".

Called EsoGlove, it is one of the world's lightest hand rehabilitation and exoskeleton devices for people with motor issues in the hand and arm.

The EsoGlove family of assistive products includes 3D software and sensors that provide biofeedback to therapists and doctors on improvements in mobility.

"Products such as our arm support system compensate for arm weight and weakness, and make the user's arm feel as though it is operating in zero gravity," says Ms Wang, a mechatronics engineer who co-founded the company with Dr Hong Kai Yap and Professor Raye Yeow in 2016.

One of her clients, Mr H.K. Chung, an executive in the insurance compliance business, rented the EsoGlove system about three months ago for his 67-year-old father, who suffered a stroke in November 2018 and was unable to talk or control his right arm and leg.

While his father's right leg had improved since his stroke, his right hand was still weak.

Mr Chung says: "My father had to have rehabilitation sessions for either his right hand or leg once a week, which cost about $90 to $150 a session.

"Now, with the EsoGlove, he works out his hand every day and I noticed that after just two weeks from the initial rental of the system, there were results - he was able to regain some control and was moving his fingers on his own."

He pays about $500 a month to rent the glove system, which includes a laptop and rehabilitation software that monitors movements and guides his father in flexing his hands.

"Costs aside, the fact that my father is able to benefit from the programme on a daily basis, instead of weekly, gives me hope he is only going to get better," he says.

I live quite far from my parents and the CCTV solution provides me the flexibility to check in on them more often without the need to frequently drop by and see them in person.

So far, Roceso Technologies has pumped in more than $1 million to develop its med-tech business. But it is not the only local company providing "assistive design" - high-tech gadgets, products and software that improve the lives of people suffering from various disabilities.

Another local company in the assistive space is Home-A-Genius, which has been designing affordable high-tech solutions since 2014, including home automation systems for people with disabilities and the elderly.

"We can hardwire an entire home to be controlled via the owner's mobile phone, laptop or tablet," says co-founder Cheryl Chiang, 32, who started the company in 2017 with Mr Romel Chua, 34.

One of her clients is a teenager who has a rare genetic disease which causes his bones to become brittle. He lost the ability to walk after a fracture a few years ago.

The teen felt more independent, she says, after Home-A-Genius rewired the lights, curtains and home appliances to respond to controls via an app on his Android tablet.

Ms Chiang, who is an information systems graduate from Singapore Management University, works with her team of specialists to sync light bulbs, curtains, blinds and home appliances to virtual assistant gadgets such as Amazon Alexa or Google Home Nest.

She says safety is most important for her clients, who ask for closed-circuit television (CCTV) surveillance for elderly members of the family instead of tech wearables to monitor movement.

How home automation is helping families in Singapore

Digital marketeer Cher Kong, 33, says the Home-A-Genius CCTV system has given her more peace of mind about her parents' well-being. "I live quite far from my parents and the CCTV solution provides me the flexibility to check in on them more often without the need to frequently drop by and see them in person."

Ms Chiang says that while smart home hardware used to be quite costly, prices have fallen after China entered the market in recent years with cheap Internet of Things (IoT) products such as automation circuits and devices.

"Today, although prices for home automation systems are one-third of the original cost, it is still quite high for the average home owner," says Ms Chiang, who foresees further downward pressure on prices. "A smart cooking hob and hood could cost about $5,000 compared with a normal version retailing for around $2,000."

While home automation will need time to gain traction due to the high costs, commercial automation in Singapore, such as robotics, is growing by leaps and bounds. This augurs well for people with disabilities who will be able to man these systems. 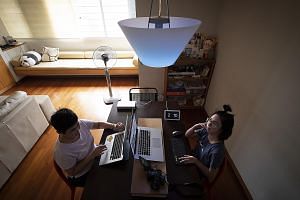 New guide on smart home tech for people with disabilities

Assistive technology changes lives of the elderly and disabled

Local robotic start-up BotsCom Solutions recently designed Sophie the Laksa Robot for a local catering company. It is not only an automated noodle station for churning out up to 80 bowls of laksa an hour, but also a performance "artist" and a hit on YouTube.

It blanches the noodles, picks the prawns and ladles the laksa gravy in just 45 seconds.

"Robotic systems such as Laksa Robot are simple to operate and the people managing them can easily be supervised," says Mr Wesley Chan, 37, a robotic application engineer and co-founder of BotsCom, which was started two years ago.

He believes a robot's built-in safety mechanisms and safe programming are a perfect fit for human collaboration. "The robot has an accuracy of 0.1mm and those with limited mobility or other disabilities are able to assist it in carrying out complex and even delicate work," says Mr Chan, who has more than 10 years of experience in factory process automation and linear robotics.

What will the start-up dream up next?

"Bridget the Breakfast Brunch Maker," says Mr Chan, on BotsCom's new robotic full-breakfast maker, which is synced with other automation input to produce a complete breakfast with eggs, sausages and hash browns.

"We are also developing bartender robots which can move around like a human bartender."

While most tech companies may draw inspiration from a down-to-earth muse, others are driven by more futuristic aspirations.

Its Holographic Button Module hovers in mid-air - reminiscent of a scene straight out of George Lucas' Star Wars - and is contactless. It works with a combination of holographic technology and light sensors using an Android-based software to detect the location of the user's fingertip.

The system has been on trial at Mapletree Industrial, located at New Hi-Tech Space@30A Kallang Place since Aug 1.

The module has piqued the interest of other property owners exploring ways to enhance the touch-free experience in their own properties, says company director Alan Tang, 39.

It is set up conveniently for both standing users as well as those in wheelchairs and eliminates hygiene-related issues, which are especially relevant given the current coronavirus pandemic. It costs between $6,000 and $9,000 to install, depending on the number of floors in the building.

While it is clear design can elevate the human condition in more ways than one, can it also be fun for those with disabilities?

Beginning this month, the new Lego Braille Bricks will be available in seven countries, followed by another 13 countries early next year. While Singapore is not on the list, there are plans to introduce the concept to more countries in the future.

Each brick in the Lego Braille Bricks toolkit has studs arranged to correspond to numbers and letters in the Braille alphabet. The bricks also show the printed version of the symbol or letter, allowing both sighted and blind children to play and learn together.

According to Ms Stine Storm, Lego Foundation's senior play and health specialist, the bricks' design was driven by the need to create play experiences which enable creative learning for all children.

"Blind and visually disabled children have the same desire and need to explore the world as well as socialise through play," says Ms Storm.

"We hope to empower the community to push the boundaries of their imaginations while sparking an interest in learning Braille among children, to provide them the important support needed to become confident and independent navigators of the world we live in."

From help in getting the best virtual assistant for the home to accessing information about how to qualify for subsidies for assistive devices, the website of SG Enable, an agency set up by the Government to help people with disabilities, provides valuable resources.

Here, you will find the Enabling Guide, launched in July last year, which is a first-stop website for people with disabilities and their caregivers to get information and resources.

Another useful resource is the Smart Home Technologies for Independent Living guide, which gives tips on how to hardwire the homes of people with disabilities with smart home devices that suit their special needs and budgets.

Smart home tech refers to virtual assistants that can understand verbal or app commands to comply with instructions or answer questions.

There is also step-by-step information for newbies on how to install smart plugs that can be used in existing power sockets and controlled remotely via an app or through a voice command.

Separately, the Enabling Guide website has details about SG Enable's Assistive Technology Fund, which provides individuals with a subsidy of up to 90 per cent of the cost of assistive technology devices, subject to a lifetime cap of $40,000.

The fund can be used to buy, replace, upgrade or repair assistive technology devices, including wheelchairs and hearing aids recommended by therapists.

• For a full list of services and information on help for people with disabilities and their caregivers, go to www.enablingguide.sg