In late 2002, a friend of Mr Tan's met Ms Murano while working on an amateur photography project.

When he introduced the pair later at a group dinner, Mr Tan was struck by the attractive, cosmopolitan woman from Tokyo.

Ms Murano, who studied business administration in college in the United States, was succinct when recalling her first impression of her husband-to-be: He was talkative. 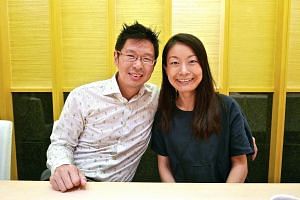 Mr Tan, whose first report card in primary school noted that he was "a talkative but helpful boy", is inspired by his quiet spouse.

"If we argue, her silence is the most deafening thing. When I notice an awkward silence, I need to back down. Her influence is huge," he says.

Mr Tan, the younger son of a retired office administrator and a housewife, who are both in their 70s, says: "We complement each other well. It's like yin and yang".

"She has a distinct Japanese style, where the approach is not too direct. Sometimes, I'm more aggressive, more concerned about efficiency. I'm the big-picture person; she is detail-oriented."

He makes decisions, such as going to Milan Design Week last month, while she checks out the background of the companies there and the location of their booth.

He says he has gained a greater appreciation of women in business through his wife's influence.

He sees this "synergy" in the fact that about half the businesses they work with are owned by women, including a Japanese glass artist who designed cuff links for atomi.

Marriage has also changed his lifestyle.

A former party animal, he no longer goes for supper or guzzles soft drinks regularly, preferring green or oolong tea instead.

"That's because we're getting older as well," Ms Murano suggests.

Both of them smile gently.

A version of this article appeared in the print edition of The Straits Times on May 02, 2016, with the headline 'Her silence inspires him'. Subscribe
Topics:
More
Whatsapp Linkedin FB Messenger Telegram Reddit WeChat Pinterest Print Purchase Article Copy permalink