DP Architects' chief executive Angelene Chan has many award-winning projects under her belt, but one that holds a special place in her heart is Wisma Atria mall.

In 2004, the firm transformed the now-32-year-old building from its traditional boxed form to a "street-integrated urban mall" and, eight years later, gave it a sparkling new "bold crystalline " facade.

"It is not often that an architect gets the opportunity to design the same building twice and to rethink and challenge her own ideas," says Chan, who is the President's Design Award's Designer of the Year.

DP Architects, founded in 1967, has 1,300 employees and is one of the largest architectural practices in the world.

Chan, 54, is a Johor-born Singapore citizen. She graduated from the University of Adelaide and worked at the Canberra office of Woods Bagot before joining DP Architects in 1990.

Some other memorable projects are The Dubai Mall in 2008 and Sunray Woodcraft Construction Headquarters in Sungei Kadut in 2014, which won Design of the Year in 2015.

You have to be an expert in engineering, in sustainable design, in landscape design, in spatial and lighting design.

ANGELENE CHAN, who says it is not enough to be an expert in architecture design these days

Tokyo-based Maki and Associates' design of Republic Polytechnic in 2006, done in collaboration with DP Architects, won the same award in 2009.

At the helm since 2016, Chan has spearheaded a publishing programme, typology research teams, weekly design learning and sharing sessions, and an annual forum - all of which "cultivate a learning environment".

"The dynamics of the design industry is changing because of rapid advancement in technologies and shifts in human behaviour due to technology. 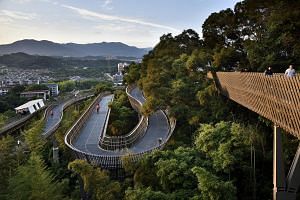 Creating a space for collaboration and creativity

$400 tents for the homeless

Taking a step back to gain a new perspective

"As designers, we need new ideas, and research will help to push design innovation."

It is a challenge to ensure the quality of the firm's architectural designs around the world stays consistent - and that the company's culture is not diluted even though it has 17 offices globally.

So Chan started the "One Global Studio" concept, which also lets the company take advantage of the different time zones and tap into a common pool of resources.

These days, it is not enough to be an expert in architecture design.

"You have to be an expert in engineering, in sustainable design, in landscape design, in spatial and lighting design," she says. "The Singapore market is small and saturated, so we need to compete overseas to sustain our practice."

Technology is also essential for innovation. "This will mean a change in the way we think and behave as designers, but it is a necessary shift if we want to sustain and evolve our creative practice," Chan adds.