Home-based beauty businesses are sprouting up in Singapore, with affordable prices and a friendlier environment drawing customers

When customers who have booked appointments at Cin City Nails arrive at the nail salon in Kembangan, they will be forgiven for wondering if they have come to the right place.

The salon is housed in manicurist Cindy Chang's home, a three-storey terrace house that looks just like the other houses in the quiet residential neighbourhood.

But past the living room filled with children's toys is a mediumsized room where the 31-year-old runs her business - a two-year-old nail salon catering to 10 to 12 customers weekly.

The mother-of-two, who spent about $5,000 to renovate the room, quit her branding and marketing job in 2009 and started freelancing as a nail stylist. She decided to open her home business a few years later as it gives her the flexibility to pursue her interests and spend time with her young children.

"Working for myself means I can adjust my schedule and make time for acting and my other interests," says Ms Chang, who has snagged roles in television advertisements for companies such as Malaysian bank Maybank and digital telecommunications operator Circles.Life. 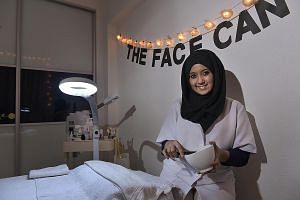 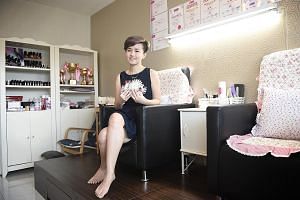 Open till 5am for CNY 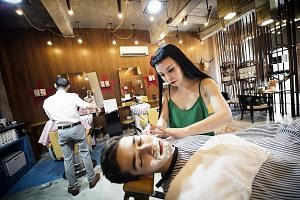 She works about four hours a day and has time to prepare her sons, aged five and six, for school, pick them up after and spend time with them in the evenings.

Working for myself means I can adjust my schedule and make time for acting and my other interests.

MS CINDY CHANG, who runs Cin City Nails from a room in her house and has had roles in television advertisements, says the home business also allows her to spend time with her young children

Working from home also means saving on rent, she says, allowing her to charge lower prices. A classic gel manicure at Cin City Nails costs $38, less than the $55 to $85 charged at most commercial outlets here.

The number of home-based beauty businesses such as Ms Chang's seems to be on the rise in recent years.

Although no official figures are available, local beauty appointment booking app Vanitee - which allows users to search for beauty services by location, post reviews, chat with service providers and book and pay - has seen a big jump in the number of home-based beauty businesses listed on it.

Singapore Polytechnic senior retail lecturer Sarah Lim, who says that there "definitely has been an increase", reckons that over the last three years, "thousands of new home-based salons have opened".

The lure, she adds, are the flexible working hours and fewer overheads such as rent and transport costs. She says the cost of running a home-based business, compared to running the same business in a mall, would be at least 50 per cent less.

Starting a business from home, she adds, is also a way for entrepreneurs to test the market before deciding if they want to plough in the capital to open a full-fledged outlet.

"It is a great chance to experiment. If you have a passion for something, a home-based salon is your chance to see if people like your style and skills," she says.

The rise of social media has also paved the way for such businesses, which use Facebook, Instagram and apps such as Vanitee, to expand their customer base.

Vanitee co-founder Kuik Xiao Shi, 32, says another benefit for customers is that home-based businesses can accommodate clients outside the typical operating hours of, say, a mall.

Business for these beauticians can be lucrative. The top 10 per cent of the home-based beauty service providers on Vanitee generate an average of $13,000 a month, says Ms Kuik.

The Face Canvas, a facial salon in a five-room Housing Board flat in Tampines, has a three-month waiting list. Ms Nareeza Abdul Rahim, 29, who opened it in 2015, says her customers mostly live in the east.

Over at Fling Nails, a nail salon in a four-room Woodlands HDB flat, manicurist Ng Huiwen, 30, says her customers have increased by 30 to 40 per cent over the past three years. It opened in 2014.

Such home businesses are above board, but there are rules.

According to HDB and the Urban Redevelopment Authority, such small-scale, home-based businesses are allowed as long as they do not cause disturbance.

No external advertisements are to be put up, business owners cannot hire anyone and there should be no loading or unloading of goods related to the business.

Massage services and plastic surgery are a no-go. No prior approval is required.

Student Amos Ang, 23, who frequents a home-based hairdresser near his home in Yew Tee, says he likes going to her because she understands his style and it is a comfortable environment. He pays $8 for his haircut.

"I've known her for so many years, so it's easy to talk to her."

Her HDB flat is also only five blocks from his, making it more convenient.

"A man must have three constants in his life - his wife, a tailor and a hairstylist," he quips.

Personal assistant Grace Tai, 38, who sees Ms Ng every month for a manicure and pedicure, says she does not mind travelling to Woodlands from her home in Braddell as she trusts Ms Ng's skills.

"I'll send her pictures of nail art and sometimes, they can be very intricate or abstract, but she'll still find a way to replicate it."

Ms Tai also appreciates the homey and friendly vibe. "I know her well now, so I'm very comfortable there. We are like friends."

A version of this article appeared in the print edition of The Straits Times on February 09, 2017, with the headline 'At home with beauty'. Subscribe
Topics:
More
Whatsapp Linkedin FB Messenger Telegram Reddit WeChat Pinterest Print Purchase Article Copy permalink