Most of Mr Toh Thiam Wei's monthly income depends on how much guests enjoy his pay-as-you-wish walking tours.

Despite the financial uncertainty, the 37-year-old now makes a steady income that, on good months, exceeds his last-drawn salary of more than $5,000.

But when he started leading tours in 2014, it was a new foray for the former naval officer. His first tour was a behemoth seven-hour route that covered Chinatown, Kampong Glam, Little India and the civic district, and left him and his six guests exhausted.

So he whittled it down to five, and finally, three hours that the tours take today.

Mr Toh, who founded walking tour company Indie Singapore, also separated the four districts into different tours. The tours run once a day on weekdays, except on Wednesdays, when there are two tours.

It proved to be a smart move. Customers have ranked the company No. 1 out of 247 tours in Singapore on TripAdvisor. These include paid cycling and food tours, as well as free walking tours by other companies.

Mr Toh, who travelled from 2011 to 2014 with his wife, 36, a freelance video editor, says he was inspired by the free walking tours they took while travelling. The couple, who visited countries such as China, Argentina and Brazil, have no children.

"We found that if we enjoyed the city a lot, it was because we had a good guide who shared local tips, personal stories and recommended places we wouldn't have thought of visiting," says Mr Toh. 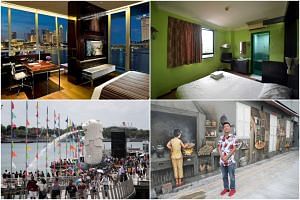 No passport required: What you can do in Singapore during June school holidays

He does the same when curating content for tourists. Chinatown walking tours hit up iconic attractions such as Sri Mariamman Temple and the Buddha Tooth Relic Temple and Museum, as well as lesser-known stops such as the Singapore City Gallery and Huggs-Epigram coffee bookstore, both located at the Urban Redevelopment Authority Centre in Tanjong Pagar.

"We want to be their friend in the city," says Mr Toh. To do so, he keeps groups to a manageable size - guests must sign up online for tours, which are limited to about 25. After some drop out, the groups usually average 10 to 15 people.

Guests such as Ms Kamila Malinowska, 33, feel that the small group size makes it easier to hear Mr Toh and ask him questions between stops. The doctor from Poland, who was travelling around South-east Asia for three months, learnt about local customs in Singapore, such as holding weddings and funerals at void decks.

But from a business standpoint, smaller groups are not the most lucrative.

During the rainy season, Mr Toh may get only two or three guests a tour. And while he recommends a $20 tip a person - about half the amount that many sightseeing tours in Singapore charge - he has had guests give him just $2.

"If one person walks away after the tour without paying, others in the group may take his cue," he says. Still, he says most guests are fair and, occasionally, some give large tips of up to $200.

Others gift snacks from home, such as sweets from Russia, jam from Seychelles and pineapple tarts from Taiwan. And some guests share their experiences visiting Singapore in the 1950s and 1960s, stories that Mr Toh collects for future tours.

Mr Toh says: "I want to rehabilitate the image of Singapore. It should be more than a three-day stopover where people not visit only shopping malls and Marina Bay Sands. I feel most satisfied when guests say they wish they had more time here."

• For more information, go to www.indiesingapore.com

A version of this article appeared in the print edition of The Sunday Times on June 02, 2019, with the headline 'Guide who wants to be your friend in the city'. Subscribe
Topics:
More
Whatsapp Linkedin FB Messenger Telegram Reddit WeChat Pinterest Print Purchase Article Copy permalink