It was her father who told her she was Facebook-famous.

Ms Carmen Choong, 24, had no idea that the clip of her and volunteer Rebecca Quinn wrangling pythons had been shared and reshared across social media platforms in Singapore.

Commenters were impressed - they posted comments such as "brave ladies" and "so calm", embellished with handclap and thumbs-up emoji.

But Ms Choong does not want to let it all get to her head.

Right now, in the team of seven full-time wildlife rescue officers in the Animal Concerns Research & Education Society (Acres), she is the only woman. But since it was founded in 2001, women employees and volunteers have been hands-on in rescue work, crawling into crevices and climbing ladders to save birds, monkeys, lizards, bats, tortoises, wild boars and snakes.

Two weeks ago, it was a perfect storm of events that made that clip of Ms Choong - and her blonde-streaked ponytail - explode on the Internet. She happened to be working with another woman. The two big rescues that day involved wriggly, photogenic pythons, and both rescues happened in public.

And when the public is there, the smartphones come out.

"It can be stressful when everyone is filming, but I tell myself and the trainees to ignore them," says the business graduate, who was trained on the job and joined Acres full-time a year ago after volunteering for a few months.

Her father, who texted her the video, supports her career, and so do the rest of her family. Though they often tease her by asking her: "So, catching animals all day - again?"

She turns serious when she says her job is not about "catching animals".

Wildlife deserve a home in Singapore, despite what many think.

"Wild animals are everywhere. We don't see them because we are too busy," she says.

When wild creatures and humans collide, the animal is too often on the losing side. Her job is to give them a fighting chance at survival, she says.

"If someone sees a python in a drain, for example, we wouldn't intervene, because if you leave them alone, they will leave you alone," she says.

Pythons like urban zones because they are home to a favourite prey item: rats. Drains are python highways, and the reptiles hide in them, resting in the day and moving at night. The two reticulated pythons she and Ms Quinn extracted were obstructing mosquito larvae inspection in one case and, in another, construction work, so that fit Acres' mission. 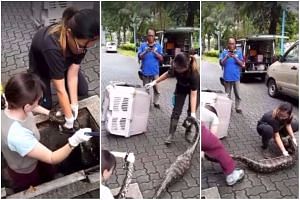 After the Singapore Zoo tags the pythons, they will be released into the nature reserves. Non-native species, such as the threatened Indian star tortoise - a hot item in exotic pet trade - are housed at Acres' Choa Chu Kang premises until they can be sent home, to India and Sri Lanka.She does not think that snake rescues are particularly dangerous or tricky if you know what you are doing. The two pythons she saw "aren't very big, only 1.5m to 2m long," she notes.

The tactics vary based on the type and size of snake, but it is a good idea to know where the head is. Approach from the rear and, if necessary, use the "grabber", a pincer with a long handle.

Birds tend to be more of a challenge to rescue than snakes because they favour hard-to-reach places, such as roofs.

She remembers one bird rescue in a car workshop that involved various ladders and extra-long and awkward-handling grabbers because the animal had wedged itself in the beams of a high ceiling.

Snake evacuations sound tricky, but, as in the case of the two pythons, such operations are usually over in less than 10 minutes. Those looking on are sometimes surprised by how undramatic the whole operation is.

A day in the life of a wildlife rescue officer

The days starts at 9.30am with a dead bird. Ms Carmen Choong wraps the grey Heron, a species found in local wetlands, in layers of newspaper and plastic.

'This is treated as biowaste," she says. The bird was sickly when it was brought into Acres' Choa Chu Kang premises by the late shift team the night before. They found it at Pasir Ris Park. The bird did not survive. Its carcass might contain pathogens, so the little bird mummy is dropped into a freezer for pickup by a biowaste disposal company.

Then she fields calls on the Acres hotline on a mobile phone that will not leave her side while she is on duty. She interrogates each caller, performing a type of medical triage, or the practice of sorting the good cases from the time-wasters. She avoids going into the field to tend to animals that are already dead or close to death. Those are disposal cases and can be handled by other agencies.

Often, it is the opposite: she gets calls about animals that are healthy and safe.

"A pigeon might be sunbathing and the caller thinks it is sick because it looks strange,"she says.

By asking detailed questions, she hopes to rescue animals that are really in danger, or are injured and stand a good chance of survival if picked up.

The van heads out around noon and it is clear why the sorting is necessary when the vehicle hits typical Singapore traffic. If Ms Choong is tied up attending to lost causes, she might not get to a genuine case in time.

Ms Choong, with fellow full-time staff member Lester Fong, in his 50s, and volunteer Anastasija Kovesnikova, 32, from Latvia, stop along Rifle Range Road. They comb the area for a sparrowhawk, which a caller said was hurt and lying in a ditch.

'It's not here," says Ms Choong. Because the caller said that after lying down, the bird had begun walking, she suspects it was merely stunned from striking something and had flown away on its own.

But it is not a completely wasted trip: She takes out a jar from the van and pulls out a striped kukri, a non-venomous snake rescued from a carpark the night before, and now, with confident handling, she releases it into the Bukit Timah Nature Reserve.

Then they are off to Eunos, where a homeowner has reported finding a tortoise. From the WhatsApp image, it is clear that the reptile is an Indian star tortoise, a vulnerable species heavily traded in the illegal exotic pet markets. In Singapore, anyone owning one can be fined.

"Its owner might have read about how it's illegal to have one and abandoned it," she says. Often, because the reptiles do not thrive well in the tropics, they fall ill and their owners find it easier to abandon them than risk exposing an illegal pet to a veterinarian.

A friendly woman meets the crew and they enter her terrace home. Her husband found it on the roadside that morning, she says. The team move it from a pail into a cardboard box. From here, it will join the several star tortoises already homed in Acres, awaiting a journey back to their native countries.

The Straits Times team leaves the Acres crew as they head for lunch. They are on duty till 5.30pm, so there is time yet for anything to happen.