The world's most expensive whisky shot has turned out to be fake.

On Thursday (Nov 2), the shot that was sold at a hotel in St Moritz, Switzerland in August for US$10,000 (S$13,592) was proven to be fake after laboratory tests, reported Swissinfo.

One of China's highest-earning online writers, Mr Zhang Wei, 36, from Beijing had purchased it while visiting Waldhaus Am See Hotel's Devil's Place whisky bar, according to the BBC.

The tests conducted by Scottish whisky experts and researchers from Oxford University, found that the drink was not the 1878 bottle of Macallan Single Malt it had claimed to be.

The whisky had a 95 per cent likelihood to have been created between 1970 and 1972, carbon dating found.

It was also possibly not even a single malt, but a blended Scotch of 60 per cent malt and 40 per cent grain.

According to Swissinfo, the hotel said it has accepted responsibility and fully reimbursed Mr Zhang. 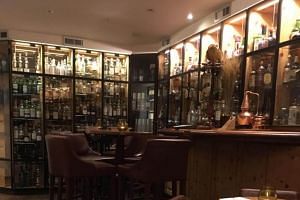 Mr Bernasconi's father Claudio had bought the bottle of whisky 25 years ago for a "five-figure sum", reported Swissinfo.

Experts questioned its authenticity soon after the record sale, so the hotel itself sent the bottle for tests.

"When it comes to selling our customers some of the world's rarest and oldest whiskies, we felt it was our duty to ensure that our stock is 100 percent authentic and the real deal," Mr Bernasconi said.