(THE BUSINESS TIMES) - "Melting pot" doesn't come close to describing the rich cornucopia that is Singapore's food scene. But cliched though it may be, it's probably the best way to describe how the Chinese cook today.

Walk into a Teochew restaurant, for example, and you'll probably find Cantonese dimsum as well.

Whether it's to attract a bigger crowd or because the distinctions between various dialects have become so blurred, it's not uncommon to find Cantonese ingredients in Teochew cooking; Hokkien sauces in Hakka recipes; or western techniques in Hainan cuisine. And in a lot of cases, many diners wouldn't even know, much less notice. 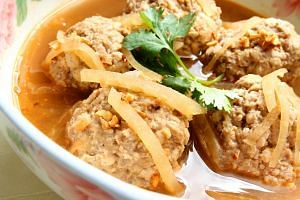 But come Chinese New Year and ethnic identify comes to the fore, especially at the reunion table where everybody wears the badge of his or her ancestral heritage. 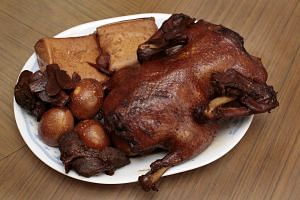 Every dish is "authentically" Hokkien, Cantonese, Hakka or whatever - and prepared in the most "traditional" manner known. Even if the original recipe has been updated over generations, the fact that its DNA remains and captures the 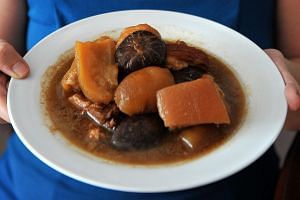 A traditional Hakka dish of braised sea cucumber made with time, labour and love

essence of each culture, is what matters most.

Here, we get the chefs of such original "soul food" to share their stories and recipes.

Hidden somewhere in the comprehensive menu of Spring Court is a dish that only those steeped in ancient Chinese cuisine would recognise. The oddly named "Phoenix Swallow Swallow" or Feng Tun Yan, was a soup prepared only for formal meals in China in the pre-communist era. It comprised a chicken - "Phoenix" - stuffed with bird's nest - "swallow".

As bird's nest was a rare delicacy in those days, the dish was reserved for distinguished guests and on special occasions.

Soon Puay Keow is the second generation managing director of Spring Court, one of the oldest Cantonese restaurants in Singapore. "My father-in-law started this restaurant in 1929 and it was patronised by the socialites here," says Madam Soon.

She reckons that this dish has been on her menu for as long as she can remember. Fewer than a handful of restaurants offer this dish because of the high cost and level of knife skill required of the chef. Preparation is also laborious: the chicken is deboned from the inside, leaving just enough meat to keep its shape, before being stuffed with bird's nest. At Spring Court, the dish costs $380 because of the amount required to be stuffed into the cavity.

Although Putien is a small prefectural city in China, its residents take their food seriously. As the beneficiary of bountiful harvests from the farm and sea, Putien cuisine places great emphasis on freshness and seasonality. Yam is an important part of local cooking; it grows in abundance in the region and a particular breed, known as Binlang, is found exclusively around Putien.

According to Chen Guang Lin, executive sous chef of Putien restaurant, Binlang yam is smaller than normal varieties found in the Fujian area. In Fujian culture, Binlang symbolises protection of the family against bad luck.

Adds Chef Chen: "There is a dessert made of yam which we serve during Chinese New Year." Diners are served only the best part of the yam; thus wastage is high. Chef Chen explains, "The yam is divided into three parts. The top and bottom are usually deemed inferior and are discarded. Only the middle section - the most tender part - is used in the dish." This highlights the significance of this dessert to the culture and the pride the Putien people place on this humble dish.

Hou Shen Hu, the founder of Good Chance Popiah, is a second generation Singaporean whose family came from Zhangzhou, a prefecture-city of Fujian. Now in his 90s, he still holds vivid memories of how the Fish Head with Yam soup was served during Chinese New Year in his childhood days. "The early immigrants were poor when I was a kid," Mr Hou says, "and it would be a luxury whenever meat was served during a meal." So meat of all kinds was reserved for special occasions such as Chinese New Year; and the matriarch of the family would save for months just to place a dish of meat on the table.

"There was one dish that we looked forward to then - Fish Head Soup with Yam," adds Mr Hou. In Chinese culture, fish symbolises "abundance". Like in Putien, yam is another favourite ingredient for the Hokkiens.

Boon Kai Chun, the current executive chef of Good Chance Popiah, is Mr Hou's grandson. He says: "Not only did I take over the kitchen of the family business, I had to learn to cook this dish so as to carry on our family, and cultural, tradition." With this dish, the choice of fish is crucial: It has to be thread fin - deemed among the more expensive seafood in Singapore - with yam acting as thickener.

It is common knowledge that in Chinese cuisine, many ingredients are selected for the auspiciousness of their names or shapes. Leek is the top choice in celebratory cooking for the Teochew as it signifies "plenty of money to be counted and kept".

Lim Bee Hong and her son, Melvin Chew, run the popular Jin Ji Teochew Braised Duck and Kwap Chap stall in Chinatown. Madam Lim says: "My mother-in-law would fry leeks with big intestines not only during Chinese New Year, but also on the first day of every lunar month." This auspicious "ritual", meant as a continuous blessing for prosperity, holds special significance for Madam Lim and Melvin as owners of a business. It also speaks of the dish's special place in the Chew family that only the matriarch would fry it. "I only got to cook it after my mother-in-law passed away," points out Madam Lim.

Continuing this family tradition, Madam Lim would cut a portion of large intestine from her stall's supply. Leeks would be selected from the nearby wet market, and washed thoroughly of soil and dirt. Frying this dish would be fast and effortless; a few select ingredients making for a modest but tasty dish.

Hakka cuisine is complex and varied, the result of historic migrations which saw the Hakkas finally settling in a pocket of land in southern China. As a people, the Hakkas were resourceful and resilient, very quickly adapting to whatever geographical situation they found themselves, be it farm or sea, and altering their living habits accordingly - which in turn helped forge their cuisine.

Chun Guan Chang or stuffed intestine with egg is a Hakka dish originating in Fengshun, a county near Meishou in Guangdong province. Since egg in the Hakka dialect sounds like "spring", this is considered an auspicious dish for the festive season.

In Singapore, many Hakkas with origins in Fengshun ended up living on tiny Pulau Ubin, where they carried on with their tradition and culture. One dish that was important to them during Chinese New Year and other festivals was Chun Guan Chang. Traditionally, chicken intestines were used but they have become hard to come by these days; so pig intestines are substituted.

From 2005, Pulau Ubin residents systematically moved to the mainland owing to the closure of their farms. With it, many of the unique traditions of the Hakka disappeared. Lai Fak Nian, owner and chef of Plum Village Restaurant, wistfully notes that not many Hakkas are aware of this traditional dish nowadays, and he only prepares it upon request.

Han Liguang of Restaurant Labyrinth grew up eating his grandma's Hainanese chicken rice and always knew her version was different from others. As everyone knows, Hainanese chicken rice is the Singapore "national" dish adapted from the recipe brought by early immigrants from Hainan island. This original form, known as Wenchang chicken, which our "Hainanese" chicken rice is based on, from which our "Hainanese" chicken derives, is still commonly served on Hainan island and used as an offering at festivals.

Although every Hainanese family has its own secret recipe, the preparation is similar. The chicken is prepared by immersing it in boiling water and slow-cooked. Then the bird is immersed again in room-temperature water to stop the cooking process. This yields soft, tender meat. A tangy chilli sauce is always served as a condiment.

Chef Han's grandmother would serve her chicken rice with a unique white sauce prepared like a roux. Chef Han recalls that his grandmother rented her house to a European family during the colonial days. Not only did she help look after the property, she learned many Western cooking techniques including sauce-making and the use of roux. Chef Han reckons she applied this knowledge to the dish. In Chef Han's treatment, the rice and chicken strictly follow traditional preparation, while innovation lies in the roux and the chilli sauce.