The lure of slurping down a bowl of noodles from the world's only Michelin-starred ramen restaurant, Tsuta, was so strong that even stop- over tourists were drawn to its first overseas outlet in Singapore, which opened on the ground floor of Pacific Plaza yesterday.

One of them was Indonesian businessman Mr Sugirato Alim, 35, who squeezed in a trip to the 18-seater eatery with his wife, Ms Yenita Jayanata, 32, during their nine-hour stopover here from Italy to Indonesia. With two suitcases in tow, they waited for about two hours for their bowls of shoyu ramen.

Mr Sugirato said: "It was well worth the risk (of missing our flight) as everything in the ramen bowl, from the broth, egg to the noodles, came together really well. I will visit the restaurant whenever I am in Singapore."

He was one of around 250 people who waited for more than an hour for Tsuta's signature shio and shoyu ramen. At its peak at 11am, the queue swelled to about 175 people and extended to three rows, packing the side corridor of the 1,000 sq ft restaurant.

The snaking queue was neat and organised, with staff directing diners to the starting point of the queue and distributing menus and bottles of water.

Tsuta stopped accepting new customers at 5pm, an hour ahead of closing time.

Most of the diners whom The Straits Times spoke to gave the thumbs-up to the ramen, saying that it was well worth the wait.

One of the earliest in line was undergraduate James Toh, 24, who started queueing at 8am - three hours ahead of the shop's opening time. He ordered a bowl of char siu ajitama shoyu ramen, which was cooked by chef-owner Yuki Onishi, 37. The dish comes with pork slices, flavoured egg, bamboo shoots, leeks and truffle puree.

Mr Toh said: "The bowl of ramen met my expectations. I like the unique ingredients, such as the truffle puree."

Another early bird was Tokyo businessman Michimao Watanabe, 43, who joined the queue at 8.30am. Despite coming from Tsuta's hometown, he had yet to taste its noodles as he was put off by the two-hour wait.

He said: "The shoyu broth is fantastic. It is not common for the shoyu ramen to be brewed with a clam-based dashi stock, and the pork slices are tasty and soft. I will be back to try the shio ramen."

However, some diners felt the quality of the food can be improved. Civil servant Zach Khoo, 26, said: "The seasoned egg is uniquely sweet, but I think that the flavour of the shoyu broth can be heavier and the ramen is quite standard. I will return only after the hype dies down." 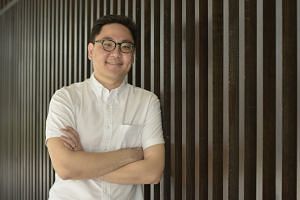 Hersing is also working on an expansion for Liao Fan Hong Kong Soya Sauce Chicken Rice & Noodle, the world's cheapest Michelin- starred eatery. It will set up a quick-service restaurant, Hawker Chan, in the middle of this month at 78 Smith Street.

Chef Onishi, who was in town for the shop's opening, said in Japanese through a translator: "Today's queue is as long as the ones that my shop receives in Japan every day and I am very appreciative of this."

He plans to visit the Singapore shop at least four times a year to check on the quality of food. He is confident that the taste of his ramen here is similar to that in Japan, as 80 per cent of the ingredients are imported from his home country. These include custom-blended soya sauces that are made in Wakayama prefecture from soya beans that have been aged for two years.

Tsuta will serve 250 to 280 bowls daily in its soft opening period till Friday. Production will be stepped up to 400 to 450 bowls daily when full service commences.

Diners can choose from eight types of ramen in either shoyu or shio broth. The shoyu ramen is made with a soya sauce blend and a dashi stock that is made with chicken, vegetables, clams and other seafood, before being topped with black truffle sauce. The shio ramen is concocted with seafood and chicken stock that is mixed with Okinawa sea salt and Mongolian rock salt, and served with green olives pureed in truffle oil.

Prices start from $15 for a bowl of ramen each.

Customers here were ushered in groups of three to make their orders and pay via a touch-screen vending machine in the restaurant, before being led to the counter seats. This is different from the queue system in Tokyo, where diners start queueing at 6am for a ticket to dine in the nine-seat eatery and return to queue when it opens at 11am.

Started in 2012, Tsuta was awarded one Michelin star in December last year.

Chef Onishi says there are plans to open a second outlet here, but the focus is on "perfecting the first outlet now".