Ramen shops in Singapore have mushroomed in recent years, serving everything from Hakata-style Tonkotsu ramen to Hokkaido-style miso ramen with butter and corn.

Despite the hot weather, Singapore diners never seem to tire of the piping hot dish.

Tsuta, the world's only ramen eatery with a Michelin star, will be opening its first outlet outside of Japan right here in sunny Singapore at Pacific Plaza in Scotts Road on Nov 6. 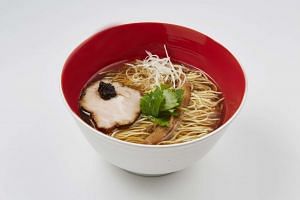 A preview of Michelin-starred Tsuta ramen: What to expect at its Singapore outlet

The restaurant here will have 18 seats, which is double the number in its Tokyo shop.

If you're hankering after ramen, be it authentic styles or newfangled versions, there is no shortage here. We cherrypick seven other places for the best ramen in town. 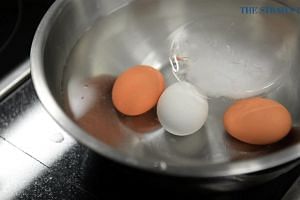 How to make miso ramen at home

When the broth arrives, I inhale deeply and am immediately hungry. Sanpoutei uses two kinds of dried sardines in its shoyu broth, alongside pork, whole chickens and vegetables. The dried fish add a deep umami flavour to the broth. Far from

being fishy, it is full of oomph and has an intriguing smoky flavour.

The thin, flat noodles, made on the premises, look rough hewn and have the springy texture that I like. Thick slices of menma are juicy and they take the trouble to torch the charsiu. An excellent bowl.

Matsuri refers to events in Japan that celebrate seasonal or cultural highlights with festivals or processions.

The festive mood is reflected in four new ramen creations by Keisuke Takeda, chef and founder of Ramen Keisuke. These are tonkotsu, or pork-broth ramen, with added elements inspired by matsuri in different parts of Japan.

For example, Sapporo, which hosts Yuki Matsuri, is known for its snowscapes and miso ramen. So the chef came up with a ramen named after it ($13.90) that is topped with powdered cheese and miso.

And Tonkotsu Ramen Nebuta ($13.90), named after the matsuri in Aomori, comes with a stock made with sardines that the area is known for.

The Tonkotsu Ramen Sanjya ($14.90) comes with a trio of spicy sauces to represent three prominent figures celebrated in the Sanjya Matsuri in Asakusa.

But if you want just a plain Tonkotsu Ramen, that is available too.

What happens when you do a mash-up of ramen and local tar mee? You get Mazesoba ($16) , a delicious bowl of dry ramen. Toss the noodles - curly, springy ramen, which I much prefer to thin Hakata-style noodles - tender charsiu, bamboo shoots, scallions and leeks together with the sauce, which has zing from vinegar and mellow heat from chilli oil. Then make sure to break the half-boiled egg, so that the liquid yolk coats the noodles too.

The shop's Spicy Charsiu Ramen ($16), full of oomph from spicy miso paste, has also been tweaked. Its cooks used local chilli powder for the ramen broth but have switched to a Japanese brand. The idea is to give the broth more oomph. Its heat is more mellow and deep, coming not as a shock to the palate but as a warm feeling in the belly.

Takumen, a ramen shop in Circular Road, is a bit different from other ramen shops. It does not have its own ramen, but instead curates signature creations from six brands in Japan.

So you can have a very different taste depending on what you order.

My favourite is the Iekei Ramen ($13.90) from Sakutaya, which is created by chef Naoaki Sakuta, an alumnus of the famous Rokkakuya shop in Yokohama. The unusual oval-shaped noodles come in a thick tonkotsu broth made with chicken and pork bones. What makes it even more alluring is the chicken oil added to the noodles before serving.

Spinach is also part of the dish, which is quite unusual. It is a good idea though, as the greens not only add fibre but also go well with the rich broth.

If you want something light, try the Toripaitan Ramen ($11.90) from Hajime in Osaka. The clear chicken broth is less oily and rich, but has a sweetness that I like.

The flavourful broth is inspired by French lobster bisque, made with rock lobsters from France. The shells are pan-fried, crushed fine and simmered for at least six hours with a blend of herbs and vegetables.

A small selection of side dishes includes stir-fried mushrooms with garlic butter ($8.80).

The noodles make the dish. The strands are thick, slightly chewy and made without too much alkaline water. They go perfectly with the complex and nuanced dipping sauce, which is deeply savoury with a hint of natural sweetness. It also has a viscous texture that clings onto the noodles, delivering mouthful after mouthful of joy.

Say what you like about truffle-flavoured dishes not using the real deal. Its aroma still turns heads when a truffle dish is served to a neighbouring table.

Kanshoku Ramen Orchard Gateway serves a dry truffle ramen ($16.90), among its tonkotsu ramen options. There is a truffle broth ramen, too.

The dry version seems pretty much like those angel hair pasta with truffle dishes that you get at French restaurants.

The thin ramen is tossed in truffle oil and bits of real truffle and comes with two slices of tender charshu.

It could do with some corn or the classic ajitama, but that would require an additional $2 each.

Not enough truffle still? Complete your meal with a side of the black truffle edamame ($5.90).