SINGAPORE - The Republic's French fine dining restaurant Odette is the top restaurant in Asia, as it clinches the No. 1 spot on the Asia’s 50 Best Restaurants 2019 list.

Helmed by chef Julien Royer, Odette finally knocks off Bangkok’s Gaggan - the former No.1 restaurant for the past four years - down a notch to second spot. Also in Bangkok, Suhring maintains its fourth place position.

Rounding up the top five are Den, ranked No. 3, and fifth place Florilege, which are both in Tokyo, Japan.

The seventh annual award ceremony was held on Tuesday night (March 26) at Macau’s Wynn Palace, and attended by chefs and restaurateurs.

Addressing the crowd, Royer, 35, who thanked his team and wife, said: “This was not expected and we’re very thankful to the people who love our cuisine and restaurant. It has been an incredible four years for us. There is so much talent in the room, so many good restaurants and good chefs. Everyone is a winner.”

This new crowning glory for Odette comes shortly after recent news of Royer’s plans to open a restaurant called Louise in Hong Kong in June, in collaboration with Hong Kong restaurateur Yenn Wong of the Jia Group.

The two-Michelin-starred Odette at the National Gallery Singapore, which opened in 2015, debuted on The World’s 50 Best Restaurants list last year at No. 28. 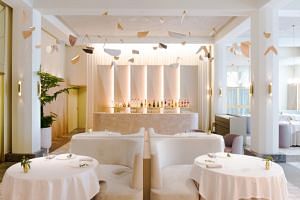 Singapore restaurants maintain a strong presence on the list - as modern Australian barbecue restaurant Burnt Ends (formerly No. 12) in Teck Lim Road climbs to No. 10, while British restaurant Jaan at Swissotel The Stamford rises from No. 44 to 32.

Japanese restaurant Waku Ghin at Marina Bay Sands is No. 40 (down 17 spots), while contemporary restaurant Corner House in the Singapore Botanic Gardens ranks No. 49 (down 13 spots) and French restaurant Les Amis at Shaw Centre ranks No. 33 (down four spots). Creative fine dining restaurant Nouri in Amoy Street, helmed by chef Ivan Brehm, is a new entrant at No. 39.

Other accolades went to Singaporean chef Jimmy Lim of JL Studio in Taichung, Taiwan, who won the One To Watch Award; Bali’s Locavore restaurant, which received the Sustainable Restaurant Award and Best Restaurant in Indonesia title; and Asia’s Best Female Chef Garima Arora of Gaa in Bangkok, which was lauded the Highest New Entry at No. 16.

This year’s list has 10 restaurants making their debut, including a first-time entry - Dewakan - from Kuala Lumpur, Malaysia at No. 46.

Now, the spotlight shifts to Singapore as the host for the Asia’s 50 Best Bars on May 9 at Capitol Theatre, and the highly-anticipated World’s 50 Best Restaurants at Marina Bay Sands on June 25.