SINGAPORE - Michelin is collaborating with the Singapore Tourism Board and Robert Parker Wine Advocate to put out the Singapore edition of the Michelin Guide in the second half of 2016.

The guide will be a bilingual one, with English and Chinese text. Singapore is the first South-east Asian country to have a Michelin guide. In Asia, only Japan, Hong Kong and Macau have guides, and the first two are bilingual.

At a press briefing on Monday morning (Nov 30), Michelin, an offshoot of the French tyre company, says that its anonymous inspectors have been in Singapore to check out the city's dining scene "in preparation for a guide to Singapore's first ever list of Michelin hotels and restaurants".

Mr Michael Ellis, International Director of the Michelin Guides, says: "The extent and high quality of Singapore's culinary scene, which is among the most dynamic in Asia, completely won us over." 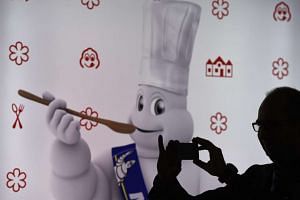 He tells The Straits Times that for the first guide, Michelin will call on its international group of inspectors, including those from Hong Kong, Japan, the United States, Britain and Spain.

They eat between 225 and 250 meals a year for work, and are well exposed to different cuisines and street food, he adds.