The outlet at AMK Hub will have more seats than the flagship restaurant at Jewel Changi Airport; a third store is also in the works

Renovation will commence soon at basement one of the mall for A&W's 2,812 sq ft space, which can seat up to 142 diners, compared with just 80 at Jewel.

Since A&W's return after a 16-year hiatus, the Jewel flagship has been faced with incessant queues, even till the wee hours of the morning. Starting yesterday, the restaurant - which was open 24 hours - operates from 7am to 3am daily until further notice. From 7 to 11am, only a limited menu is available.

A&W debuted in Singapore in 1966 and left in 2003 because of stiff competition from other fast-food chains.

A&W Restaurants - which operates under A Great American Brand, a consortium of various A&W franchisees both in the United States and overseas - has almost 1,000 franchise locations in 10 countries. The Singapore outlets are directly owned by the company.

The Straits Times sat down for an exclusive interview with the brand's representatives - Mr Kelvin Tan, 41, A&W's international director for marketing; Ms Sally See, 35, international manager for business development; and Ms Eva Goh, 37, regional manager for marketing - who candidly discussed issues such as the overwhelming response to the Jewel outlet and future plans for the brand here.

"Jewel's opening was a great point for us to learn what to avoid, and to also help with planning the design for AMK Hub," says Mr Tan. 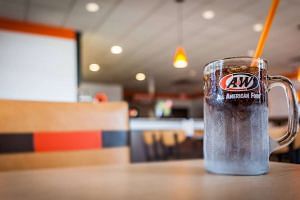 A&W returning to Singapore: 5 things about the old-time fast-food chain

A&W to return to Singapore: 5 other old-school fast food chains that have come and gone

Seating arrangements, for example, will be "more flexible" to accommodate big groups of diners. There will also be a counter for diners to see its signature waffles being churned out.

And while the Jewel outlet is meant to look "more international", the AMK Hub one will be more "family-oriented", he adds. Selfie corners will also be set up to cater to A&W's growing millennial crowd.

Ms Goh is also looking to introduce a retail section in the future to sell merchandise such as T-shirts, caps and pins.

On the choice of AMK Hub, Ms See says: "The A&W brand is something people remember from childhood. We see baby boomers taking their children to the Jewel outlet. With the AMK Hub outlet, we hope they can relive those memories of the time when A&W used to be in Ang Mo Kio."

The AMK Hub outlet will operate during normal mall hours but may eventually open for 24 hours, depending on the response from diners, says Mr Tan.

Over at the Jewel restaurant, the change in operating hours is to better manage the crowd, Mr Tan says.

"Yes, when we opened, the agreement was to open 24 hours. The problem is that the current volume of diners is way above what we expected and we are not comfortable with the level of cleanliness in the restaurant," he adds.

"Food safety and cleanliness are more important than making money. Once things settle down and we can do intermittent cleaning, we will resume a 24-hour operation. But I can't predict when that will be yet."

While there is no pork or lard on the menu, A&W has not submitted its application for halal certification yet. The restaurants were halal-certified when the brand was in Singapore previously.

Mr Tan adds: "It is not the right time, since we don't even have the time to clean the restaurant."

The halal application may be submitted for the AMK Hub outlet first, he says, depending on whether it can cope with the crowd.

While the Jewel outlet offers bestsellers from A&W outlets worldwide in addition to the classics, the AMK Hub branch will have the brand's signature items.

Ms Goh is also looking to expand the menu for AMK Hub and offer breakfast items as well.

The company will consider delivery services only when the business stabilises, says Mr Tan.

Emphasising that A&W is here to stay this time, he says that a third outlet is slated to open in the second quarter of next year. He does not rule out opening more outlets in areas such as Tampines and Jurong, adding that the company is already in talks with Jurong Point mall.

He says: "We want to slow down and make sure we get our footing right before the third store. We are very selective about the locations and are still learning along the way."