Despite the rise of trendy grains such as quinoa, rice still remains in the spotlight as restaurants churn out novel dishes with the grain

The consumption of white rice may have been targeted as one of the top concerns in the war on diabetes, but the grain is still very much a staple in the Asian diet.

Even as trendy grains such as quinoa, couscous, millet and teff make their way into restaurants here, rice still gets attention with interesting cooking methods and Instagram-worthy presentations.

Some Chinese restaurants offer pao fan, where rice is fried or baked till crisp and then topped with hot soup or gravy. The rice makes a festive, popping sound.

The dish is inspired by a popular dish, "Crossing the Bridge Noodles" (guo qiao mi xian), in China's Yunnan province. Hot chicken broth is added to a bowl of rice noodles and topped with ingredients including chicken, thinly-sliced pork, tofu skin and vegetables. The chef uses rice and garoupa instead.

Other more modern methods of using rice include Restaurant Ibid's take on porridge, where white radish trimmings are boiled till soft and cooked in a Thermomix with rice, soya milk and finished with butter and salt.

Over at The Spot restaurant at Marina One, executive chef Lee Boon Seng uses black glutinous rice in his Frozen Salted Chocolate Peanut dessert. It is mixed with Valrhona chocolate and Greek yogurt. 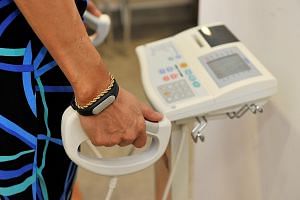 How you take white rice can 'make a big difference' 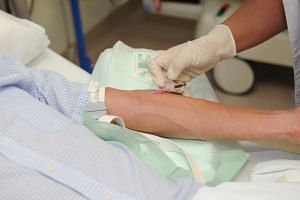 All you want to know about rice, sugar, the glycaemic index and diabetes

Ms Bibi Chia, principal dietitian at Raffles Diabetes and Endocrine Centre, however, cautions that eating too much white rice might lead to excessive carbohydrate intake and an increased risk of obesity and diabetes.

Brown or red rice is healthier. To make the switch easier, she suggests starting with 20 per cent of wholegrain rice, adding that it has shown to reduce the risk of diabetes by 18 per cent.

She says: "Pao fan has added fat from cooking oil and sodium from the soup. However, like porridge, the calorie count might be lower due to water in the dish.

"To make pao fan healthier, use healthy oil, try a mix of brown rice, use less salt and increase the portion of vegetables."

The Health Promotion Board (HPB) is also working with food and beverage companies, manufacturers and hawker centres to push the consumption of wholegrains.

It endorsed fast-food chain McDonald's new red rice porridge, a permanent breakfast item introduced last month, with the Healthier Choice Symbol for being higher in wholegrains and lower in calories.

Created by Ms Anna Lim, founder of The Soup Spoon chain, it includes 100 per cent red rice, along with ingredients such as corn, beancurd and goji berries.

An HPB spokesman says: "Contrary to the perception that healthier food tends to be bland and boring, food establishments have successfully reformulated recipes that are healthier and still as tasty.

There is the mui-fan inspired local skate with pearl rice risotto, dried sole coriander broth, and salmon roe ($25++, available for lunch, 11.30am to 2pm on weekdays, and dinner, 5.30 to 10pm, Mondays to Saturdays).

The risotto is made with Kokuho Japanese rice cooked with house-made fish stock, grated young ginger and cream.

The black glutinous rice is cooked in water, salt and sugar before 70 per cent Valrhona chocolate and Greek yogurt are folded in.

What: McDonald's launched a permanent breakfast item islandwide - red rice porridge (from $3.80 a la carte, from $5.80 for Extra Value Meal).

The portion may look small, but it makes for a substantial breakfast as it is loaded with sweet potato, shiitake mushrooms, beancurd, corn kernels and goji berries.

Info: Go to www.mcdonalds.com.sg for the full list of outlets and opening hours

He makes his own chye poh, and deep-fries bamboo shoots which are coated in century egg yolk that has been powderised.

For the porridge, white radish trimmings are boiled till soft and cooked in a Thermomix with rice, soya milk and finished with butter and salt.

Another favourite rice dish of his is lotus rice.

What: A popular dish on the menu since Hua Ting's relaunch is Dong Xing garoupa with crispy rice and superior stock ($28).

Steamed rice topped with raw garoupa slices is first presented in a hot stone bowl. Hot stock is poured over to cook the fish, followed by puffed rice, fried sole and Chinese parsley to add flavour and texture.

What: There have been long queues for the renowned congee from Mui Kee. The porridge takes five hours to prepare. Raw rice grains are first mixed with mashed century eggs, which help to break down the grains.

Then pork bones and fish stock are added and the mixture is stirred every five to 10 minutes, for five hours. This results in a fragrant and creamy congee base.

Upon order, each bowl of congee is prepared a la minute in a copper pot. Highlights include the parrot fish belly congee ($11.80) and decadent Alaskan crab leg congee ($22).

To make the crispy rice bubble, the rice is first cooked, then baked at 100 deg C for about three hours.

Finally, it is left to dry for two days. The crispy rice bubble is placed in a bowl to serve and a hot gravy with the ingredients is poured over, creating a sizzling effect.

It makes for a fun Do-It-Yourself one bowl wonder as you mix everything together in a hot stone bowl, which gives the rice a nice char.

What: Rice gets a simple but tasty treatment at Circa 1912, which serves old-school dishes.

The menu offers a steamed rice with prawns, greens and duck fat ($8 a person, dinner only). The rice is steamed with duck fat till it is about 80 per cent cooked, then topped with raw prawns to continue steaming for another 10 minutes.

By then, the juices from the prawn will have been absorbed into the rice, which is tossed in crisp minced garlic, spring onions, soy sauce and sesame oil.

For lunch, get a bowl of plain chicken essence congee ($3), which uses newly harvested rice, "old" rice and glutinous rice to give different textures.

The grains are boiled over high heat with chicken stock and bones to add flavour.

What: A new dish at Cantonese restaurant Yan is its fried brown rice with diced vegetables and pine nuts ($22, $33 or $44, above).

As a healthier option, a mix of brown rice and white rice is used, along with corn kernels, diced mushrooms, pickled mustard, egg and pine nuts. The rice is served in a hot claypot which causes a crispy layer to form at the bottom.

Stir the rice before serving to mix in the crispy bits.

What: While there are duck dishes aplenty at the new Forbidden Duck by celebrity chef Alvin Leung, the seafood rice in aromatic duck soup ($32) is probably the most comforting.

The piping hot soup comes with fresh scallops, prawns and duck meat. Crispy puffed rice is added to the soup for some crunch.

A version of this article appeared in the print edition of The Sunday Times on May 13, 2018, with the headline 'Rice and shine'. Subscribe
Topics:
More
Whatsapp Linkedin FB Messenger Telegram Reddit WeChat Pinterest Print Purchase Article Copy permalink