When Ms Jocelyn Chng watched the queues snake on for days at Singapore’s first vending-machine cafe, it was a moment of sweet vindication for eight years of hard work.

Her company, JR Group, had launched it at a Housing Board void deck in Sengkang in August.

The hungry and the curious came by the hundreds, eager to experience the fully automated cafe where a cluster of six vending machines dispense everything from beverages and snacks to cooked meals and dessert at all times of the day with the push of a few buttons.

The highlight for many was the hot meals, priced between $3.50 and $5.

They contain no preservatives and range from chicken bolognese to curry chicken with rice. Peel back the lid on the box of seafood hor fun and the smoky aroma of noodles cooked in a wok whets your appetite.

There are plans to open 20 more of these cafes next year in residential estates, offices and schools, with two up and running by the first quarter in the HDB estates of Rivervale and Pasir Ris. 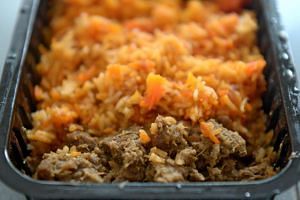 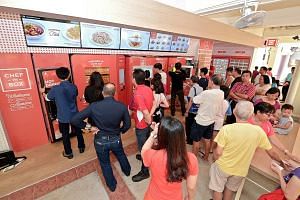 Ms Chng, 49, says: “Everybody says to me now, ‘Congratulations, you saw this coming before all of us.’ Yes, I smelled the business opportunity early, but making it happen was really about persevering through the challenges.”

She turns up for the two-hour long chat in the void deck where the first VendCafe is located in an ensemble of black – a billowy sleeved blouse and skirt with lace trim, embellished nails and leopard print heels.

She is unvarnished, however, about the hurdles she has had to overcome, both in business and in life – she was her family’s chief breadwinner at 21 and a widow with three sons at 37. For her, crises have always represented opportunities and the food vending-machine business was no different.

When the company launched its first machine dispensing hot meals in 2008 at a hospital, the machine could not keep food fresh for an extended period of time and wastage was high.

They were also unsure of what customers wanted to eat, so “it was omakase every day”, she jokes, referring to the Japanese practice of letting the chef decide what one eats.

It took eight years of research, tests, machine upgrades and the launch of 100 standalone hot food vending machines in army camps, universities and industrial offices before the first VendCafe was rolled out.

The gutsy entrepreneur, who has been running businesses since she was 14 and who is also the managing director of the home-grown sauce company Sin Hwa Dee, says: “Some colleagues wondered why I believed in a business model like this and would not give up on it. I had to keep telling them about the future of it and make them believe in it, so that they would not feel like they are following a crazy leader.”

She also had to fend off naysayers who pointed discouragingly to the tepid take-up of food-vending machines in other countries. But she never hesitated. “I believe in producing good quality, wholesome meals, bringing them closer to the customer and automating the cafe to cut down on manpower,” she says.

It was her unwavering vision and tenacity that inspired the team to stick by her when the going got tough, says Mr Tony Chng, 39, JR Group’s chief operating officer and her brother. He adds: “She also seeks the team’s counsel and respects our advice. But she is discerning and knows when to listen to us and when not to.”

She has been honing her business acumen since she was a teenager running her family’s sauce business, Sin Hwa Dee.

Her parents had founded the business in the late 1960s when the sauce factory they used to work for closed down to make way for urbanisation.

Their family-run business sold condiments such as soya sauce to mainly hawkers and Ms Chng remembers helping out as a teenager, washing sauce bottles, cooking soya beans and sticking labels on products.

By the time she was 19, however, her father, who was in and out of hospital and who would die two years later from colon cancer, had left her, the eldest of six siblings, to oversee the company.

Her relatives had advised her father to sell the business when he fell ill, but when he asked for her opinion, she said she would run it. The reason: She would have to work regardless to help the family make ends meet, and if she worked for someone else, she would not have the flexibility of taking care of the family.

It helped that she had an interest in enterprise from a young age.

She was 14 when she started her first business, pairing private tutors with students and earning a commission for each match.

She also sold cosmetics in her free time and used the money she earned to buy treats for her siblings. "I didn't take pocket money from my parents because I saw how hard they were working and my dad was sick."

She ended the side jobs when she started overseeing the family's sauce business. Then an economics student at the National University of Singapore, she attended classes in the day and spent the rest of the time at the sauce factory in Woodlands Industrial Park.

The business struggled in the first year after her father died. It was in debt and competitors had bet that it would fold in six months under a greenhorn.

One time, a customer laughed in my face when I told him I was a university graduate. He called out to everyone, 'Come and see this girl. She says she is a graduate and she is doing this.' To them, you don't go to university to sell soya sauce. I felt so humiliated. After that, I put my title as sales representative to hide my identity.

To prove to suppliers, customers and the bank that "we can be trusted", she often went the extra mile, including helping out at the stalls of her hawker clients on weekends. That arrangement, however, was not always about business.

"They were my customers, but we had also become friends," she says.

Her brother Tony says she often ends up befriending her business partners because "she genuinely cares for people".

"She sees her business partners as being more than the sales they bring in for the company. She always tries to help people, so they reciprocate."

This sentiment is echoed by Madam Patricia Lee, 57, managing director of Chilli Api Catering and Chilli Padi Nonya Restaurant, which is a customer of Sin Hwa Dee.

Madam Lee says she was struck by Ms Chng's "modest and humble character" when they first met and a friendship quickly formed as they bonded over shared experiences in the food industry.

To grow the business, Ms Chng also put up notices near food stalls, asking store owners to call her if they needed sauces.

Those who did not called her too - competitors who told her to stay off their turf or else.

But she did not pay heed to their threats because she believes a barking dog never bites. Fortunately, nothing untoward happened to her.

With her slogging 20-hour work days, and assisted by her mother and second sister, the business gradually stabilised. Its list of clients grew to include airline caterers, hotels and restaurants and its factory increased from one to three in the Woodlands Industrial Park by the early 1990s.

She also introduced new machines that automated production and computerised the business.

After a visit to a food and beverage (F&B) trade fair in Paris in 1992, she decided to take Sin Hwa Dee global. She says: "The fair really opened my eyes. So many people were saying that the sauce business is a sunset industry, but there are other parts of the world that need our Asian sauces. The market is so large."

To gear up for export, they worked on branding, packaging and research and development. She also decided to move the business under one roof and into a large factory that can accommodate bigger machinery for increased production.

Things hit a snag in 1995, however, when the sale of its old factories to finance the purchase of the new space stalled and the main contractor for the new factory ran away with the money for renovation.

It did not help that she was pregnant then with her first child.

Nonetheless, she worked around the clock to resolve matters, pausing only to deliver her son before returning to work immediately, holding meetings with her managers at home while she was on post-delivery convalescence.

It was with the help of the banks, she says, that the company was able to tide over the cash-flow problem and break into the export market the next year.

The first overseas market was Taiwan and its Kee's brand of sauces - named after her father, Chng Kee - was sold in supermarkets and to food businesses. Today, the company is a multi-million-dollar business whose sauces are exported to more than 30 countries.

In 2001, she started a new food business, JR Foodstuff, with her husband Richard Wong.

An entrepreneur himself - he ran a successful education centre - he would lend her a hand with the sauce business when she needed help and he would join her on trips to F&B trade fairs overseas.

On one such trip, he saw the potential of ready-to-eat meals and was keen to launch them in Singapore. Persuaded by his vision, she co-founded the company with him, although he was the one mostly driving the business, selling ready-to-eat dishes such as herbal chicken and yam paste with ginkgo nut to hotels, restaurants and caterers.

In 2003, at another trade fair, he caught a whiff of the promise of hot food vending machines and was convinced it would take off here.

But he never had a chance to get started on the business. He was found to have lymphoma the next year and died two weeks after being diagnosed.

Ms Chng says: "It was my family that kept me going. I was always the eldest sister looking after them, but at that time, they surrounded me and looked after me."

She realised, too, that she "couldn't drown in sorrows and not care" because she is responsible for her staff and is now both mother and father to her three sons. Her youngest son was two years old then.

Raising three sons - now aged 21, 18 and 14 - and running a business has not been easy, she admits, but she makes sure she spends time with them, including attending their competitions and performances, blocking out work trips to be with them when they have examinations and bonding over weekly family meals.

In 2008, with her siblings running Sin Hwa Dee day to day, she turned her attention to JR Foodstuff, growing the business into JR Group, a group of four companies that includes restaurant management and the hot food vending- machine business her husband had envisioned.

She says: "I felt that the time was right because people's perception of chilled and frozen food had changed.

"People used to buy freshly slaughtered poultry from the wet market, but by then, they knew that chilled and frozen meat sold in supermarkets is safer, fresher."

She adds: "Changing people's lifestyle and mindset is not easy, especially when you are a first mover, but we are excited about the revolution we are bringing to the F&B market."