Verdict: There was a unanimous chorus of approval from the judges praising the filling as well as the baked pastry. Sanmugam likes the generous filling of chicken and onion, while Tan enjoys the "well-fried rempah and flaky pastry". Low adds: "It's a curry puff that I just want to eat another bite of."

What started in 1926 as a popular eating place selling pastries and ice cream in High Street - MPs and lawyers were patrons - still retains its winning formula for curry puffs today.

While curry puffs are generally filled with potatoes and eggs, the baked ones from Polar Puffs & Cakes are loaded with chicken meat encased in flaky puff pastry.

More than two million curry puffs are produced for sale every year across its retail stores and at selected petrol stations and convenience stores, says a Polar spokesman.

It was founded by the late Chan Hinky, a Hong Kong immigrant who came to Singapore with plans to open a cafe. His eldest son Chan Cheong Hin continued the business until the 1970s, before handing it over to his brother Chan Yoke Onn.

Mr Chan then continued the business until the High Street premises were acquired in 1986 to make way for the current Parliament House.

Polar started its first takeaway outlet at the former OUB Centre in Raffles Place. It also started operating a small factory in Thye Hong Centre in Redhill to produce puffs and cakes.

In the 1990s, the business expanded to multiple outlets and petrol stations across Singapore. The company, pioneers in the Yellow Ribbon Project to give second chances to former offenders, has been getting its pastries made by inmates in prison since 2004.

In a temperature-controlled environment, the curry puffs are transported to its factory in Woodlands for the baking process. About 600 puffs are baked at a go, before being dispatched to the various outlets .

The curry puff - with an Asian filling of curry chicken and a French-style pastry - requires 81 folds of the raw dough to achieve its layers. 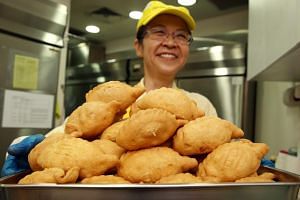 Other popular items include sugar rolls, chicken pies and cakes. 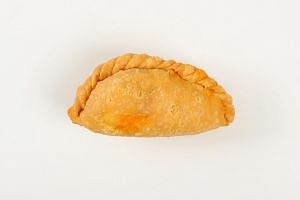 Other curry puffs in the test

The business is now run by a team of executives as well as a board of directors which include thirdgeneration family members.

The Polar spokesman says it is franchising the business overseas as well as setting up an e-commerce portal later this year.

Acknowledging its roots in the colonial days, she says: "This East meets West fusion creation was anchored in history; synonymous with the creation of Singapore as an English Commonwealth colony in the Far East.

"This heritage product has stood the test of time, from when production was done entirely by hand to being done by automation."

It does not surprise housewife Janet Lee, 54, that Polar took the top spot as she has been a long-time fan of its baked puffs.

She says: "I prefer the flaky baked crust to the usual deep-fried pastry, which can be very oily. There's quite a bit of meat in the filling as well. My three children like it, along with their other puff items."