After so many years, the first cup in the morning is still a religious experience for me

I have on my left hand, right between the thumb and the index finger, a little war wound.

It was sustained fairly recently - not in a military training exercise or road warrior stunt, but in a vainglorious bid for some morning coffee.

I have only myself to blame. You see, in this post-Nespresso age that we live in, I was in the mood to be fancy. That meant taking out an hourglass-shaped container called the Chemex glass flask and placing a "specially formulated" Chemex paper filter in it.

According to the purists, one is then supposed to put ground coffee in the filter and make a little hole in the powder (called a "divot") as if to plant something in it.

After that, pour a bit of hot water (80 to 90 deg C) into the divot and wait for the coffee to "bloom". It's really like horticulture - the fresher the coffee, the bigger the bloom.

Finally, pour the rest of the hot water into the filter (from the outside in or inside out? Who knows? Who cares?) and wait for the coffee to distil into the flask.

So, I have been told that coffee drinkers with any semblance of pride apparently use a Hario V60 Buono Kettle to pour the water. After all, its goose spout and easy-to-grip handle allows one to "pour with high accuracy and calculated trajectory".

I, on the other hand, try to squeeze and tilt my Chemex flask under the spout of my hot water dispenser - which, mercifully, does dispense water at exactly 90 deg C, so I am not a complete Philistine.

The trouble is that such gymnastic rituals aren't supposed to be performed at the crack of dawn when one hasn't quite woken up yet. That morning, just as I was starting the big pour, a cat outside yelped.

Seconds later, I was yelping as the 90 deg C liquid missed its mark. 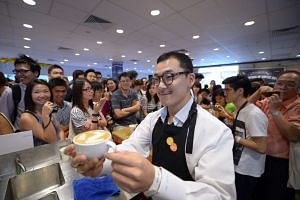 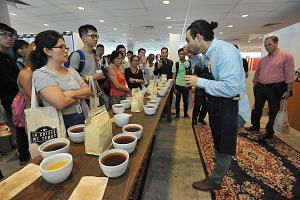 Stir of excitement for coffee lovers at Singapore Coffee Festival

Despite the searing pain, I did not drop the flask. Whatever may happen will happen, but one does not ever drop the flask. For it is the divine vessel from which one partakes the First Cup.

And after so many years, the first cup of coffee in the morning is still a religious experience for me, a spiritual awakening.

Lest you think I am being borderline blasphemous, I must point out that the first cups of coffee to be drunk by anyone in history were, by most accounts, indeed religious experiences.

Whether it was an exiled Shadhili disciple or monks examining strange bright red berries a goat-herder found, the story has the same outcome.

Bright red berries were found. They were eaten, but didn't taste so good, so they were thrown on the fire or roasted. Thereafter, they tasted even worse but oh, the aroma!

So the roasted beans were ground up and dissolved in hot water and voila, coffee was born. Upon drinking it, people found that the liquid gave them a new vitality never experienced before.

What's clear is that it was seen as a kind of Muslim mystical drink in the 1500s, when coffee started to be exported from the Middle East to other parts of the world. Sufi mystics in Yemen were known to use coffee as an aid to improve concentration and invoke spiritual intoxication when they chanted the name of God.

By the time I had my first coffee when I was a kid in the early 1980s, coffee beans had not only been roasted, ground up and brewed into a liquid, but that liquid was also now being freeze-dried into tiny little granules and put into jars labelled Nescafe.

It was impossible to ignore Nescafe instant coffee at the time. The launch of its Gold Blend was marked by cheesy serialised television advertisements with couples flirting in the dead of night or during work breaks, their true desires thinly disguised behind smiling lips and sips from the coffee cup.

My dad drank a lot of it, together with Carnation creamer and sugar, in the ultimate "three-in-one".

I always preferred my mum's coffee, however. She drank coffee made from Owl brand coffee bags, with lots of sugar and no milk.

She didn't like her coffee as thick as how it is made in coffee shops here and, when I went to England to do my undergraduate degree, the light black Owl coffee I drank was always among the strongest reminders of home.

I guess that would explain the way I reacted to the subsequent development of the coffee industry.

In the 1990s, the growth of Starbucks, Coffee Bean & Tea Leaf and other mega chains popularised the espresso culture, but because I preferred my coffee black, the craze for lattes, cappuccinos and all manner of mixed and blended iced coffee drinks passed me by.

This is why the current craze for a return to lighter dripped or hand-poured filtered coffee is right up my alley - once I get the hang of drinking it without sugar.

What is also up my alley is what has been the recent "democratisation" of coffee.

When I was growing up, the coffee industry used to be dominated by big brands such as Nescafe, Nespresso and Starbucks, but these days, coffee drinkers seem to be attracted to the smaller niche cafes and independent roasters that bring in and blend beans from all around the world.

People are also experimenting with alternative ways of making their coffee, from cold press to French press, Chemex to siphons and vacuums. All of this is on display at the Singapore Coffee Festival, which is on this weekend at the F1 Pit Building.

When I visited last Thursday, it was like simultaneously walking through a living documentary of my past love affair with coffee, as well as a promise of shiny, new obsessions to come.

Of course, coffee's role in history has been more than just a beverage to perk people up in the morning.

When I was at university, there was a small coffee joint across the street from my college called Queen's Lane Coffee House.

Because of its location, my friends and I would sometimes gather there for a chat. But I never thought much of it, beyond the fact that the coffee there was quite expensive for the tiny cups it was served in.

It was only decades later that I realised that Queen's Lane is one of the oldest coffee houses in Europe, having been established in 1654.

And according to an article in The Telegraph published in 2012, England's coffee houses - like their counterparts in other parts of the world - were hives of political and social discourse.

In fact, the term "coffee-house politician" at the time referred to men who spent all their time in such establishments, sharing their opinions about the state with anyone who cared to listen.

"On entering, patrons would be engulfed in smoke, steam and sweat and assailed by cries of 'What news have you?' or, more formally, 'Your servant, sir, what news from Tripoli?'" according to the piece, written by London historian Matthew Green.

Today, our stock standard Starbucks is very different, but the connection between coffee, journalism and opinions has arguably persisted.

Which is why The Straits Times has chosen to be the host of the Singapore Coffee Festival and hopes to continue to be the perfect accompaniment to your morning cup of coffee for many years to come.

A version of this article appeared in the print edition of The Sunday Times on June 12, 2016, with the headline 'My love affair with coffee'. Subscribe
Topics:
More
Whatsapp Linkedin FB Messenger Telegram Reddit WeChat Pinterest Print Purchase Article Copy permalink