The domestic doyenne was recently asked on Watch What Happens Live With Andy Cohen if she thought pumpkin spice was “delicious or for basic b***hes only.” She responded: “The latter.”

The oversaturation of the flavour – it is in pasta sauce, cheese, dog treats and even deodorant – are contributing to a collective feeling that pumpkin  spice just is not as special as it used to be.

But Starbucks will not be stymied in its attempt to capture all of your sweater weather dollars. On Thursday, the eve of autumn, the coffee chain introduced a new seasonal drink as counterprogramming: the maple pecan latte. Soon we will be calling it the MPL, I guess. 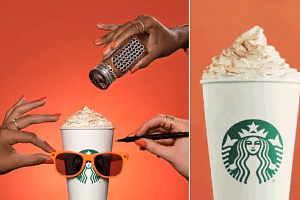 Here is how the company describes the drink: “Inspired by classic fall flavours and the iconic changing leaves of the season, the Maple Pecan Latte  features warming notes of maple syrup, pecan and brown butter, perfectly highlighting the heart and soul of Starbucks beverages – our signature espresso.”

There are also new seasonal cups in autumn colours.

Maple is having a moment right now. Earlier this month, Market Watch predicted that it could usurp pumpkin spice to become the predominant flavour of autumn.

People are seeing more and more maple foods and beverages in stores too.

There is maple water, which began trending last year as coconut water drinkers looked for some variety (birch water is on the rise too).

Maple has found a toehold as a yogurt flavour and it has been incorporated into bourbons by Knob Creek, Jim Beam and others.

Maple bacon has been a mainstay flavour at most new-wave doughnut shops for a few years now.  As with many of Starbucks’ other new menu additions, maple lattes were making the rounds on independent coffee shop menus well before Starbucks picked up the recipe.

It is not the first time Starbucks has put maple on its menu either: There used to be a maple macchiato, but it was phased out nationally in the US in 2012.

And one of its biggest competitors is pushing maple this autumn too. Dunkin’ Donuts is serving maple pecan lattes as well as a maple sugar bacon breakfast sandwich.

McDonald’s seems sure to follow: It already debuted a maple caramel latte in – naturally – Canada.

There is a certain disconnect to maple’s new status as an autumnal beverage because maple syrup is harvested in the spring – usually between March and April. Still, it makes sense because people gravitate towards heavier flavours and foods when it begins to get cold.

But is maple the antidote to the pumpkin spice madness? That depends on how many other types of products adopt the flavour – and whether it triggers a similar backlash.

Maple has a head start in breakfast items such as oatmeal and waffles. But Food Dive points out that it is beginning to get the pumpkin spice treatment, showing up in items such as cheese, vodka and protein bars.

Further search revealed maple dog treats and candles and perfume, for anyone who would like their pet’s breath, their home and their body to smell like pancakes. It does not work quite as well on a T-shirt as pumpkin spice does, mostly because it only rhymes with the word “staple”.

In a few years, we will probably roll our eyes at the thought of another season of maple pecan lattes. For now, though, we welcome any threat to the stranglehold that pumpkin spice has staked on our autumn foods.

Long live the MPL, until it, too, becomes the choice beverage of the basics.