Madam Mariana Hamid will be organising more get-togethers with her non-Muslim friends. That’s because there are now more halal certified dining options.

The 56-year-old housewife recently dined at halal-certified The MeatHouse by Eighteen Chefs in Century Square mall and intends to suggest the eatery as the next meetup venue with her ex-classmates.

She also finds it interesting to try food that is not traditional Malay food. “Food is one way to get acquainted with other cultures.”

The MeatHouse by Eighteen Chefs opened in June and received its halal certification on Sept 14.

Co-owner and chef Benny Se Teo, who also co-founded the Eighteen Chefs restaurant chain, says: “The world of halal dining has evolved. Diners are well-informed. We want to provide Western food with an Asian influence that everyone can enjoy.”

Mr Se Teo, 58, and his team of chefs tested meat and ingredients from different halal suppliers for two months before The MeatHouse opened.

“We don’t use ingredients just because they are halal-certified. Their quality must meet our standards,” he says.

“Halal certification can get Muslim diners in the door, but we must deliver on quality food, ambience and service to keep them coming back.” 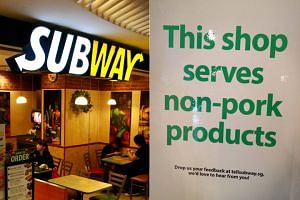 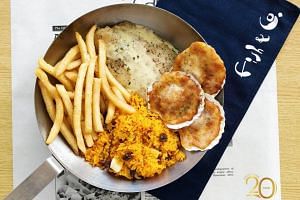 Restaurant chain Fish & Co back to being halal-certified, after success in Muis application

Mr Fazil Abdul Hamid Marican, 47, chief executive of a consultancy firm that advises companies on obtaining halal certification, notes an increase in the number of halal-certified eateries that do not just serve Malay, Indian-Muslim and Indonesian cuisine in the last three years.

Since his consultancy launched in 2004, he has advised more than 600 businesses on obtaining halal certification. Up to 90 per cent of his clients are non-Muslims. He observes that F&B outlets that obtain halal certification can see their business improve by about 20 per cent.

Its director of operations Gavin Chen, 47, says: “We already had gluten-free and vegetarian options on our menu, so the next natural step was to go halal to become even more inclusive.”

To get halal certification, the restaurant completely revamped its beverage menu to avoid alcohol. Instead of wine pairing, Halia introduced the pairing of food with drinks prepared from herbs and spices.

Executive chef Ciaran Armstrong, 34, who is from Ireland, says running a kitchen to meet the criteria for halal certification by Muis involves constantly challenging himself and his team to be creative with the use of ingredients.

At Seoul Garden Group, its two new concept outlets at Century Square this year are halal-certified.

Two Hana is a cafe serving Korean-Western fusion food, and Seoul In A Sandwich sells sandwiches with Korean fillings. The first Seoul Garden restaurant opened in 1983 and grew into a restaurant chain that became halalcertified in 2002.

Mr Andrew Lee, 57, the group’s chief executive, recalls the difficulties encountered by the company during the halal certification process.

The restaurants initially lost a segment of customers when it removed dishes with pork, but eventually gained a new group of Muslim diners after it obtained halal certification.

It took a year to plan Two Hana’s menu before it was launched.

Due to the difficulty of obtaining balsamic vinegar that is halal-certified, the cafe uses a yogurt-based dressing that is infused with honey citron jam instead of vinaigrette.

While pork is often featured in the cuisine of her home town in Chiang Rai, Chef Tuk, 39, has managed to replace it with meats such as chicken and duck. Moo Tod Kratiem, for instance, is a classic Thai dish of crispy fried pork with garlic, but Chef Tuk came up with a version using duck instead.

She says: “It is possible to remain true to Thai flavours through the use of the right mix of ingredients in the marinade and seasoning.”

This halal-certified cafe in Hougang has a new addition to its menu – the Unagi & Cheese Croissant ($24.90 nett), a butter croissant served with Emmenthal cheese, unagi kabayaki, scrambled eggs, shredded seaweed and salad greens.

The cafe’s signature is the Cheese Burglette, available with a single patty ($24.90) or double patties ($29.90). Swiss raclette cheese is melted and scraped onto the patty at the table. The burger is served with Cajun fries.

SEOUL IN A SANDWICH

The Seoul Street Toast ($6.50) is made with white bread and has a filling of onion cabbage omelette, chicken ham and sliced cheese.

The Soy Garlic Chicken ($7.50) is made with focaccia bread, and contains daikon slaw with gochujang dressing and soy garlic chicken.

Info: Call 6260-4339 or go to www.facebook.com/SeoulinaSandwichSG

THE MEATHOUSE BY EIGHTEEN CHEFS

The eatery, which received its halal certification earlier this month, is a meat lovers’ paradise. The Meat and Mash is an innovative house favourite. Customers choose from chicken ($14++), lamb ($18++) and beef ($20++).

The grilled meat is served on a skewer hanging on a custom-made stand, and juices from the meat drip into a bowl of mashed potato.

For steak lovers, go for the Tomahawk (Australian grass-fed beef) which costs $12++ for every 100g. Tomahawk steaks range from 1.2kg to 2kg. The Porterhouse (New Zealand free-range grass-fed beef) is $60++ for 600g.

Also popular is Singapore-style Chilli Crab Spaghettini ($26++), which is served with a spicy, sweet and tangy sauce.

This is a new concept outlet by restaurant chain Seoul Garden Group. It serves Korean-Western fusion food and received its halal certification on Sept 7.

Or go for the Striploin Bap ($15.50 nett) which is made using Meltique striploin from Australia.

Beyond Pancakes, which has an outlet at Marina Square, opened its second outlet at City Square Mall in April.

Specialising in jelly cheesecakes, the retail chain opened its first outlet at E!Hub @ Downtown East in 2011 and received halal certification for the outlet in 2012. Popular items include the Neapolitan ($43.50, left), made of three layers of cream cheese cake in different flavours and topped with blueberry jelly. There is also the Mosaic Gem ($157.90), a 14-inch square cake with a customised drawing, for which customers can choose a combination of up to three flavours. There are eight flavours available: Classic original cream cheese, Alluring Chocolate, Heavenly Blueberry, Lovable Strawberry, Luscious Lychee, Tangy Mango, Tempting Cookies and Vivid Mosaic.

The restaurant, which is into its second year of operations at Park Hotel Farrer Park, received its halal certification in June last year.

Thai specialist chef Nipaporn Doungiaisantisuk has refreshed the menu with new items that will be available from tomorrow.

The Cha-Om Fried Egg ($12++) is an omelette containing acacia leaf and served with a Thai fermented shrimp and chilli dip of Nam Prik Kapi that is pounded by hand.

Another signature item is Roast Chicken Esarn Style ($16++), which is marinated in a spice blend that includes ground white pepper.