Celebrity chef Jean-Georges Vongerichten has been cooking for more than 40 years and while he says he has probably tasted most ingredients, there are still things that manage to intrigue him.

Buah keluak is one of them.

The chef tried the Indonesian black nut for the first time last week at progressive Peranakan restaurant Candlenut, where it is served with braised chicken or pork ribs, and fried with rice.

The renowned New York-based chef, who has close to 40 restaurants to his name and an empire that spans from New York to London, including The Dempsey Cookhouse & Bar at Como Dempsey in Singapore, was in town last week to cook at the Paddock Club for the Singapore Grand Prix and to launch new offerings at his restaurant here.

On tasting buah keluak, the chef, who grew up outside Strasbourg in Alsace, France, says: "Over the years, there are fewer things that I have not tasted, but there always seems to be something.

"I had never heard of this nut. It has a bitter almond flavour, it's unusual. I love it. So that's a new discovery for me."

I had never heard of this nut. It has a bitter almond flavour, it's unusual. I love it.

However, he does not know if he will use it in his cooking just yet, he adds.

The Michelin-starred chef, who turned 60 in March, says this year has been his busiest.

After opening The Dempsey Cookhouse & Bar in February, he opened another five restaurants around the world, including Tangara Jean-Georges in Sao Paulo, Brazil; Jean-Georges at The Connaught in London's Mayfair and at the Waldorf Astoria Beverly Hills in Los Angeles; as well as Public Kitchen and ABCV in New York.

His oldest restaurant, Jojo, which he opened in New York in 1991, will also have its interior refreshed next month.

"Maybe because I am a 'rooster' and this is the Year of the Rooster."

He is married to South Korea- born cook, TV show host and cookbook author Marja Allen, 41. They have a daughter, 17; and he has a son, 35, and a daughter, 29, from his first marriage, and two grandchildren.

On the topic of food trends, he adds that he has noticed the rising popularity of plant-based dishes around the globe, as diners become more health-conscious.

"People want lighter things now, more plant-based meals. At ABC Kitchen, for example, there are 40 dishes on the menu - three meats, three fish and the rest are vegetables, grains. People are opting for a more balanced diet," he says, adding that this year's opening of vegetarian restaurant ABCV is also a nod in that direction.

New additions on the menu at The Dempsey Cookhouse & Bar also reflect this trend. They include a refreshing mango and frisee salad with fresh mozzarella and black olives ($20); and a bright and slightly tangy kale and broccoli salad with soft-boiled egg, parmesan and croutons ($19).

Chef Vongerichten says: "It is dangerous to touch the menu too much. I would say 50 per cent of the menu is a staple of the restaurant. If you constantly change the menu, diners lose their bearings." 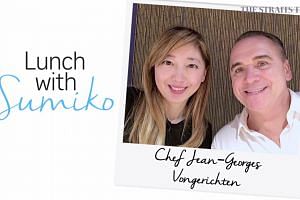 While he changes some items according to the seasons and introduces new ones for the more adventurous, he also acknowledges that diners are often creatures of habit.

As such, there will always be items such as salmon and beef on the menu, but served differently.

His new creations are miso-marinated grilled sirloin with coriander pesto and sesame seeds on a bed of wilted spinach ($48); and seared salmon in a carrot-coconut sauce, with baby carrots and basil ($32).

The chef worked in Singapore in 1983, as part of the opening team of the luxe now-defunct Restaurant de France at the then Le Meridien hotel (now Concorde Hotel Singapore) in Orchard Road. He says Singapore's dining scene has changed tremendously over the years.

"It is different now because there are so many more restaurants these days. It is good to see that Singaporeans still love going to their favourite hawker stalls, but some are also disappearing.

"There are big restaurants and small restaurants, but the new hawker generation is missing."

He hopes the Michelin Guide will continue to elevate the hawker scene and that more young talent will be encouraged to enter the trade.

He adds: "A hawker stall with one or two items can be a good way for young chefs to get a start.

"If I were a young chef, 23 or 24, I would do it immediately. You don't have to buy chairs or tables - people come and pick up the food from you. It is the best concept - fast, casual and you can prepare something good."