SINGAPORE - He usually receives short queues of up to 10 minutes at his chicken rice stall, but Mr Niven Leong, owner of Uncle Chicken Rice stall at The Bedok Marketplace, had to work extra hard on Tuesday.

The lunchtime queue was longer than usual, with up to 15 people standing in line, waiting up to 25 minutes for their orders.

They each paid $42,800 for the recipe and hands-on training at the stall, which includes cooking and chopping the chicken, serving customers and managing inventory.

Sin Kee is a well-known name among chicken rice stalls in Singapore. It started in 1971 at the now-defunct Margaret Drive Hawker Centre. In 2002, it relocated to Mei Ling Street Food Centre and was helmed by Mr Leong's younger brother, Benson, until last year. He now runs Sin Kee Famous Cantonese Chicken Rice at Block 40, Holland Drive. 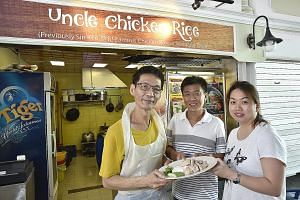 Most of the customers visited Uncle Chicken Rice stall to see what the fuss was about.

One of the early birds was housewife Mabel Long, 69, who visited the stall at about 11am, about an hour before it opened. She used to visit the stall when it was at Margaret Drive, but lost track of it over the years.

She says: "I am glad that the authentic flavour of their Cantonese-style chicken has remained the same after so many years, and it is good that the recipe gets passed on so that future generations of diners can get to try the food."