Find out the difference between ice cream, gelato, soft-serve and frozen yogurt

(WASHINGTON POST) - Before you order a double scoop or take out the ice cream maker, consult this guide to frozen treats.

To be designated as ice cream, the United States Food and Drug Administration (FDA) stipulates that the product contains at least 10 per cent of fat. If it has more than 1.4 per cent of egg yolk, then it can be called frozen custard, French ice cream or French custard ice cream.

Gelato (Italian for “frozen”) is more dense - there is less air whipped into it as it is churned. Gelato typically has less fat than ice cream, as it is often milk-based (instead of cream) and contains little or no egg yolk.

While it is not mentioned per se in the FDA regulations on frozen desserts, that swirly, old-time favourite known as soft-serve typically contains between 3 and 6 per cent of fat. 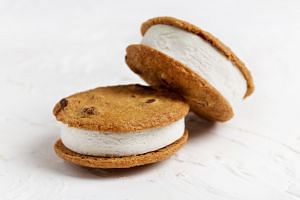 Make the ice cream sandwich of your dreams

The fat content in fro-yo, short for frozen yogurt, can vary depending on whether regular, low-fat or non-fat yogurt is used. When served straight from their churning machines, both soft-serve and fro-yo have soft, airy swirls.

Ice milk contains less than 10 per cent of fat; fresh from the freezer, it tends to be rather hard and has a few icy particles. You are not likely to see it around these days, though. In 1994, the FDA allowed manufacturers to label ice milk as low-fat ice cream and the designation has since come to replace ice milk as a term. Low-fat ice cream today tends to include stabilisers and additives that help mimic the mouth feel of a higher-fat ice cream.

Sorbet can be made with practically anything - fruit, vegetables and chocolate, for example. But it almost always lacks dairy and egg products. Its ideal texture is smooth and mostly free of icy shards. Fruit-based Italian ice (think Rita's brand) is similar in texture to a slushy that has been frozen. It has an icy crispness and is loose-set. However, storebought brands such as Luigi's are packed into small containers and frozen solid.

Linguist Dan Jurafsky writes in his 2014 book, The Language Of Food, that the name sherbet originates from the Arabic word sharab - the name for fruit syrups consumed for health and refreshment. (The root of the word means “drink.”) In Persia, syrups made from orange blossoms, sour cherries and the like were called sharbat - in Turkey, serbet - from the same Arabic word.

In a blog post, the Merriam-Webster dictionary writes that when the word was imported into English in the early 17th century, the extra “r” crept in incidentally and is now an accepted - if not as common - way of spelling and pronouncing it. By FDA standards, sherbe(r)t must contain between 1 and 2 per cent of fat.

This is one of those confections that goes with everything and is easy to make - much easier than tempering yolks, as one does for conventional ice cream, or waiting for custard to cool.

You will need an ice cream machine.

The yogurt needs to be frozen for about six hours. Store in an airtight container for up to one month. Let it stand at room temperature for 10 minutes before serving.

1. Set a fine-mesh strainer over a medium bowl.

2. Combine the yogurt, raspberries, honey, lemon juice, salt and vanilla extract in a blender or food processor. Blend on high speed for at least one minute or until well incorporated. Pour about three-quarters of the mixture through the strainer into a bowl. Use a flexible spatula to push the mixture through and discard any seeds.

3. Stir the remaining one-quarter of the mixture back into the strained mixture. The final frozen yogurt will have a few seeds.

4. Churn in an ice cream maker according to the manufacturer’s directions. Once the yogurt has finished churning, transfer it to a storage container and freeze for at least six hours to allow it to ripen. During that time, the yogurt will become harder and smoother and the flavours will have a chance to develop.