Foodies clamouring for a taste of the world's cheapest Michelin meal have turned up in droves at London's Granary Square over the past three days.

Mr Chan Hon Meng was in London from March 14 till 16, as part of a collaboration with Singapore Airlines (SIA) and the Singapore Tourism Board (STB), reported Eater London.

In response to queries from The Straits Times, an SIA spokesman said on Sunday night that the "turnout was overwhelming", attracting people in excess of 300 every day, which led to the event being sold out on the three days.

SIA, STB and the Changi Airport Group came up with the project to promote Singapore as a destination or as a stopover for travellers from Britain to Asia and Australasia, the spokesman said.

He said: "We identified street food as an increasingly popular trend in London amongst millennials and felt that it would be an opportunity to make Singapore more relevant for travellers interested in food and lifestyle experiences by creating buzz around Singaporean street food."

People in the queue were also asked to participate in a social media contest and post about their Hawker Chan experience to stand a chance to win a three-night stay in Singapore. 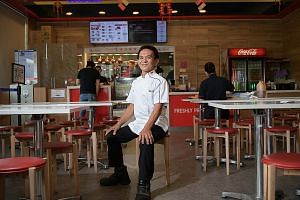 Lunch With Sumiko: Hawker Chan and his lucky star

A snaking queue had formed even before 10am, with some people waiting for up to two hours in line, according to posts on social media.

Many had to be turned away but those lucky enough to sink their teeth into the dish said they had no regrets waiting so long.

A pair of friends, which included a Singaporean woman, told Business Insider in an interview on Wednesday that they had arrived at 10.30am, waited one and a half hours for the food, and that it was really good.

The Hawker Chan brand is a spin-off of local hawker stall Liao Fan Hong Kong Soya Sauce Chicken Rice and Noodle, which was started by Mr Chan at Chinatown Complex.

In 2016, he was awarded a Michelin star and his S$2 chicken rice was touted as the world's cheapest Michelin-starred meal.

After signing a deal with Hersing Culinary, Mr Chan went on to open outlets around the world, including his first in Australia last December.

Mr Chan told Eater London: "My dream is to see more Singaporean cuisine and more of the undiscovered local hawker talent enjoyed on an international stage. Whether you're a restaurant chef or a street market hawker - with food you can never stop learning."